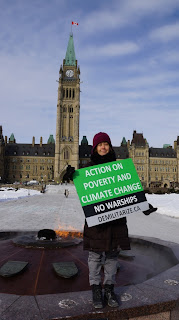 A Halifax peace activist, who has been protesting the $35 billion National Shipbuilding Procurement Strategy (NSPS) outside the Irving Shipyard for months, took the message to Ottawa.

On January 25th, Tamara Lorincz stood in front the eternal flame of Canada's Parliament at noon with her signs: 'No Warships, Green Jobs Now' and 'Action on Poverty and Climate Change, No Warships'. I joined her protest and got 14 photos.

Lorincz also delivered open letters to all the political leaders: Stephen Harper, Thomas Mulcair, Bob Rae and Elizabeth May, calling on them to reverse their support for the warship contract. 'Sadly,' she says, all four political parties have supported the National Shipbuilding Procurement Strategy'. Those letters are posted on Lorincz's web site Demilitarize.ca

Tamara Lorincz is a small lady, a lawyer and environmentalist, with a strong elegant voice. She has degrees in business and law, certificates in Environmental Law and Environmental Management. She is a member of the Nova Scotia Voice of Women for Peace, the Halifax Peace Coalition, the Ecology Action Centre, Sierra Club of Canada-Atlantic Chapter; and is on the national board of the Canadian Voice of Women, and on the international advisory committee of the Global Network Against Nuclear Power and Weapons in Space with Dr. Helen Caldicott.

I first met Tamara Lorincz May 27-28, 2009 at Lansdowne Park, Ottawa, where a peace coalition protested the holding of CANSEC — Canada's largest arms bazaar. Lorincz was there with her sign 'Canada's War in Afghanistan — Illegal and Immoral'. I wrote about her as a person who persistently and courageously expressed her heart-felt rage by confronting from the sidelines military, embassy, business and other persons who entered the gates of CANSEC with the following:
At the most recent protest on Parliament Hill, Lorincz and I stood for one hour for peace in very cold weather, with only several people coming by. Four young people stopped briefly as well as a Global TV cameraman who interviewed her.

When asked why she persists when so few people come around, Tamara Lorincz said that her conscience leaves her with no other choice. Like Martin Luther King Jr. on his Beyond Vietnam speech April 4, 1967, she felt that 'a time comes when silence is betrayal'.

Listen to her 9-minute radio interview: Wednesdays against Warships protest, 'Maritime Morning' with Jordi Morgan, 95.7 FM , January 2, 2013. She explains that big money spent in the U.S. could employ many more Canadians to repair our infrastructure and provide early education to develop our future generations. 'Tackling climate change and tackling poverty — those should be our priorities.' Discussion follows.

The message is clear. The building of combat warships must stop and alternatives must be found for militarism and military spending. [How about the Canadian Dept. of Peace Initiative and Centre for Global Nonkilling?] 'Who is the 'enemy'? Why are the politicians creating an atmosphere of fear with their propaganda? Let's 'stop inventing enemies', as Robert C. Koehler wrote in an article about the U.S.A. on 'Controlling Lucifer'. Canada's Prime Minister Harper ought to know that the Cold War is over. Let's work together nonviolently with Russians, Norwegians, Americans and others in northern development.

In her website Demilitarize.ca, Lorincz suggests that billions could be better spent on such human needs as affordable housing, mental health, post-secondary education, childcare, and renewable energy. She cites the former U.S. President General Dwight Eisenhower's 1953 critique of the military industrial complex which is still relevant today. The central threat to peace today is the production of military weapons of mass destruction, primarily for the benefit of the rich.

In sum, 'the federal government should sink the combat warship strategy,' she advised. Here, here!
By Tamara Lorincz

Posted by Koozma J. Tarasoff at 20:12 No comments:

From: Larry Ewashen, Words of Wisdom.

Did Doukhobors once believe in hereditary leadership?

The principle of hereditary leadership is problematic to the Doukhobors today on at least two counts:

We have to acknowledge that there are those people who support the 'hereditary' principle of leadership, but they are misled in believing that this is part of the Doukhobor movement (since 1895). A record of oral tradition was published in 1909 (p. 234) by Vladimir Bonch-Bruevich in Zhivotnaya Kniga Dukhobortsev [Doukhobor Book of Life] as purportedly supporting the hereditary line. The sample appears to be skewed in favour of the believers of leaders who do not question the basis of their beliefs, rather their views relate to old outlived customs, which in the present day judgement do not form the central core of Doukhobor values and philosophy. History, as I understand it, needs to be interpreted in the light of new information. 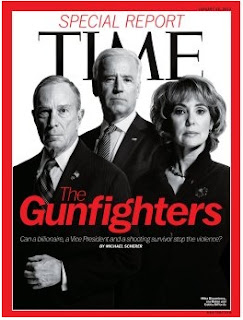 The Gunfighters is the cover story in this week's TIME Magazine Special Report.

In a way, these three U.S. politicians joined the Doukhobor movement. Their stance reflects the recent Gallup Polls showing that more than half of Americans support more strict gun laws for the first time in more than a decade.

Gunfighters usually means fighting with guns, but these are fighters against guns. This twist of meaning reminds me of how the Doukhobors changed their image by taking their given label of 'spirit-fighters / -wrestlers', intended to describe those who fight against the spirit, and redefined it to mean those who fight for the spirit in every human being.

In 1895 Doukhobors also became "gun fighters" for burning guns in three large bonfires near three clusters of their settlements scattered in the Southern Caucasus. At that time, as Koozma Tarasoff points out, Doukhobors transformed from sectarian religious groups into a social movement. Harsh punishment for their mass protest against weapons and war resulted in 8,400 (about 1/3 of the most persecuted) being resettled in Western Canada .

Using this media, Doukhobors can continue to recruit "gunfighters" via songs and gun burning performances to promote a non-killing culture around the world, one soul at a time.