War — The Slavery of Our Times 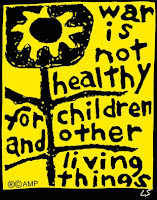 In his 1900 essay, The Slavery of Our Times, Lev N. Tolstoy argued that killing people is murder and therefore war is contrary to Christian teachings (and one can add, to any warring religion).

He explained how: "Laws are rules, made by people who govern by means of organised violence,..." The army is an instrument of murder which kings, emperors, presidents and prime ministers have institutionalized.

He concluded that war is as useless, brutish, murder and harmful madness to society as slavery. The alternative is  love, non-killing, and a fair economy for all.

It has been over a century since Tolstoy penned that profound essay (below), yet we daily hear the drums of war with the propaganda of 'neutralizing' the enemy, the development of robot planes (drones) to better kill, and for surveillance and control of human populations.

Our 'military industrial complex' (which the late President Dwight Eisenhower in 1961 called as the greatest threat to our society) continues to devour the daily bread of ordinary citizens around the world, as it seeks to develop more and more weapons of mass destruction.

Surely guns kill whether they are rifles or atomic bombs!  Let's stop murdering people for some spurious patriot cause or more precisely for some economic gain.  Shame on us! War is certainly not healthy for children and other living things.
Where is our sanity?
Have we gone mad as a human race?

Brothers and Sisters around the world, let's outlaw war just as we have earlier done with human slavery. The time is now! This is a time for cooperation, a time for using science for human goodness and beauty, a time for common sense. Let's get on with it, my friends! Let's turn to a new path of sanity, justice and respect for all. Are we not members of one human family?

I invite you to read Tolstoy's The Slavery of Our Times

William (Bill) Perehudoff was a farmer, designer and artist whom I have known since the 1950s. He died in Saskatoon, Saskatchewan on February 26th at the ripe age of 94.

The Saskatoon Doukhobor choir will sing at the funeral at Saskatoon Funeral Home at 10:30 a.m., Monday, March 4. Burial at Bogdanovka (Cee-Pee) Cemetery, 6 miles west of Langham.

For me, Bill was a Doukhobor legend. He illustrated several of my books. In 2002, I wrote:

'One prominent artist in a family of five is an honour. But when the wife [Dorothy Knowles] is also a prominent artist and the children [Rebecca, Catherine, and Carol] are equally promising, that is something outstanding. All were born in Saskatchewan where the landscape and the spirit of the Canadian prairies had affect. William (Bill) Perehudoff (1919- ), the head of the family, comes from a Doukhobor background and has been painting for over fifty years. His passion for form and colours have led him to experiment in his farm studio on the North Saskatchewan River. His perseverance and tenacity appear to stem deeply from his Russian roots.' (Spirit Wrestlers: Doukhobor Pioneers' Strategies for Living (2002), pp.117-119.)

Little is published about Bill's opposition to militarism and war. During World War II, he was one of 92 Doukhobor absolutist conscientious objectors who chose to go to jail for four months in Prince Albert, Saskatchwan. While many of his contemporaries in the 'English' (other Canadians) world were avid patriots, Bill in his true Doukhobor spirit of plakun trava (meaning, flowing against the current) bravely went against the prevailing military propaganda of the day.

In Saskatoon in 1948, Bill was first known for murals he painted in the Intercontinental Packers Limited cafeteria. In 1952, he began a 25 year career as art director at Modern Press, a company owned by the Saskatchewan Wheat Pool, and publisher of the weekly Western Producer.

I began to know Bill in 1955 when he contributed Mother and Child, the first of his 5 abstract covers for The Inquirer, the first Doukhobor publication in the English language, which I edited. The original was soon purchased by the Saskatchewan Arts Board (page 10). By 1958, we published four articles about Bill's art career.


For my first book, Pictorial History of the Doukhobors, published in 1969, Bill laid out the text and did 16 pen and ink drawings of arms burnings and other historic views. I worked closely with Bill as he greatly enhanced this first pictorial book about the Doukhobors. His images filled in a missing visual texture of our Russian Doukhobor heritage. Coming from a Russian Doukhobor background, Bill had a creative feel for his Slavic roots, and admired the Doukhobor movement.

I vividly remember seeing the book for the first time at the Doukhobor Historical Village Museum in Verigin, Saskatchewan. It was July 6, 1969, the celebration of the 70th anniversary of Canadians of Russian descent. Bill arrived in his station wagon filled full of books and 16 framed pen and ink drawings. We stacked the books for sale on a table at the meeting site. I sat for hours selling and autographing copies, talking and watching people admire the new pictorial volume. I also bought all his drawings, some of which have been on display in my living room for decades.

For a while this book become a rare collector's item which sold for up to $700 a copy. Now you can find lower prices online.

In 1977 Bill retired from Modern Press, but continued to paint until 2001 when poor health resticted his work.

When I was co-curating the exhibit The Doukhobors: 'Spirit-Wrestlers' at the Canadian Museum of Civlization in 1995-1997, Bill generously donated a large abstract painting of a Doukhobor sash, acrylic on canvas (Tarasoff, 2002: 118) to the Museum. He also donated a painting to the Doukhobor Museum in Castlegar, BC. To the National Doukhobor Village Museum in Verigin, Saskatchewan, he donated an artistic depiction in colour of the 1895 arms burning which was then used in the Centennial quilt design (ibid.).

In 1994 was awarded the Saskatchewan Order of Merit, and in 1999 was named a member of the Order of Canada. He also received the Queen's Diamond Jubilee Medal.

At the end of the 1990s the CBC videotaped A Conversation with Bill Perehudoff on resistence to abstract art at his rural home and studio overlooking the North Saskatchewan River. This video was aired again by CBC on February 8, 2013. Bill asserts the need to simplify confusion to allow art to last and 'let colour come alive'.


I feel that Bill Perehudoff is not fully recognized as an abstract modern artist, nor is his Doukhobor heritage well known. A Google search for the name Perehudoff finds 100s of pages about Bill's art career, and images of him and his paintings, even a Wikipedia page. After his death, some of his paintings are being sold for more than $50,000.

In sum, Bill Perehudoff's legacy will carry on not just as a creative artist who experimented with the abstract form as a way to discover something new so as to attract public attention, but also his deep roots in the prairie soil, and in the Russian Tolstoyan Doukhobor tradition of the Spirit Within, including its important nonkilling universal ethic.

We will miss you, Bill, but we will remember the beauty that you have given to the world, as well as the wisdom to work towards a world without wars.