During Orthodox Easter dinner on April 9th here in Ottawa, I served my traditional Doukhobor vegetable soup — borshch — which I cooked using my mother’s recipe.

My guests asked a question that never occurred to me:
'What is the Origin of borshch'?

In the past I was more concerned about the English transliteration of the Russian spelling which does not have a ‘t’ at the end. Q76: Correct Spelling of borshch?

Historically this was a staple Slavic poor peoples’ peasant soup, made year-round with local ingredients.

A Google search for ‘origins of borshch, borshcht, borsch, borscht’ returns what appear to be well researched histories with similar information. Russian and English Wikipedia histories differ. Here is a summary with 'Sources Online' listed below:
Sources Online
Books by Burlakoff
See all Questions and Answers.
Posted by Koozma J. Tarasoff at 09:01 No comments:

What borshch means to me

As a comfort dish of many local culinary Slavic peoples, this soup dish is commonly made in a big pot to feed everybody for several days, and is often more delicious the next day. 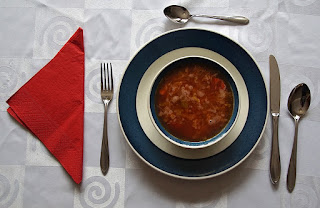 Many Doukhobor and Mennonite websites talk about borshch (borsht, borshcht) as a popular dish amongst their population.

As I see it, borshch has become a world wide common dish with almost institutional qualities.

Because of their pacifist nonkilling stance, Doukhobor borshch was traditionally vegetarian, with dill, cabbage, tomatoes, potatoes, carrots, celery, onions, beets and butter being its most prominent ingredients. Today, 2018, only a small minority of Doukhobors are vegetarian, although those who make borshch make it without meat.

Most other non-Doukhobor borshch recipes often include meat as part of it although in the pioneering era, less than 10 percent of the population ate meat because it was largely not available and was expensive.

Borshch is utilitarian in that you could include almost any available vegetable that you have around and add meat if that is your preference. It’s cheap, available, communal and healthy. A universal dish! A similar soup was made in Roman times.

During the Soviet Union, borshch was the most common dish enjoyed at home and in restaurants. It was even used by Russian cosmonauts in freeze-dried form.

Borshch is a ritual dish for Orthodox, Greek, Roman Catholic and Jewish peoples in Eastern Europe. For Doukhobors, it is the first food served (without meat) at funerals.

In brief, for Doukhobors, borshch is a universal dish with Slavic heritage and communal roots, and is largely known for its association with hospitality, nonkilling and good health.

Thanks to our Russian ancestors who have for centuries made this delicacy a contribution to world culture, these are outstanding human qualities that society dearly needs today. Enjoy!

Bolshoe spasibo! [A Big thank you!]
Posted by Koozma J. Tarasoff at 09:00 No comments:

Issues for the World Peace Forum

Plans are in full swing to hold the 12th World Peace Forum in Toronto, Canada April 19 -22, 2018, organized by the Schengen Peace Foundation.

This year the program is "Leadership for Peace" — conflict resolution, connecting peacemakers to women, stability and peace, and finding common global values.

I will not be able to attend the Toronto Peace Forum. So I emailed to my peace network, some of whom are attending, a set of issues that I believe would make the Peace Forum more dynamic and relevant:

Thanks Koozma, I will look for opportunities to make those points. We aren’t sure what the “Forum” will be like, never having attended before. However, we felt we couldn’t pass it up, since it is so close There are four of us from Civilian Peace Service attending.
———————————————————————————
From Bill Bheneja:

Thank you Koozma for pointing these excellent peace themes so succinctly.

Saul and I attended one of the earliest Peace Forums in Vancouver in 2006, one of the many workshops/seminars there was on Department of Peace; it was in connection with Second Global Summit of Departments of Peace conference being held in Victoria, we had several high level speakers including US Congressman Denis Kuccinich and Dot Maver.
———————————————————————————
From Peter Stockdale:

Very good, Koozma, Champion of Nonkilling (I hate the word but love its meaning)! Stay nonkillingableforever.

Thank you, Murray. It was great to be out with the like- minded. 100 years ago, people hated the word Nonviolence, except a few like Tolstoy and Gandhi. 100 years from now when we become sick of deliberately taking human lives, Nonkilling will be the word. That sounds so high minded!

As I post this article on April 4th, I am reminded that 50 years ago Martin Luther King Jr. was assassinated on this day in the USA by a lone gunman. Because King made a radical indictment of US empire, militarism, capitalism and racism, the main stream media demonized him. Here are King's words of wisdom which organizers of the World Peace Forum need to take to heart by speaking truth to power:


'We as a nation must undergo a radical revolution of values. . . . When machines and computers, profit motives and property rights are considered more important than people, the giant triplets of racism, extreme materialism and militarism are incapable of being conquered.' — the Rev. Martin Luther King Jr., April 4, 1967.

King's legacy is a moral reminder to all of us that we must persevere against the forces of evil not just with words but with deeds for nonkilling peace — or face human extinction. The 12th World Peace Forum is an opportunity to address this challenge. The question is: Will the participants dare to do so?
Posted by Koozma J. Tarasoff at 14:17 No comments: