Why is the threat of WW3 at an all time high?

The Doomsday Clock, maintained by the Bulletin of the Atomic Scientists since 1947, shows the likelihood of a man-made global catastrophe. During the past 3 decades it has steadily moved to an all time danger. Why? What can we do?

August 6 will be the 74th anniversary of the bloody 1945 atomic bombings of Hiroshima and Nagasaki in Japan. By educating ourselves about the global politics and propaganda of war, I hope we will prevent WW3 and a nuclear holocaust, by protesting war industries, writing our governments, alerting our family and friends — anything to protect future generations.

The chart (click to enlarge) shows minutes to doom. The lower, the worse. It got worse from the end of WW2 (1945) through the Korean Conflict (1951-1953), then relaxed after the Cuban Missile Crisis (1962), and remained fairly steady during the Strategic Arms Limitation Talks (SALT) decade (1969-1979). Again it got worse, until President Reagan (1981-1989) and Secretary/President Gorbachev of Russia (1985-1991) began peace negotiations, which ended with the breakup of the Soviet Union (1991). Since then, for nearly 3 decades, threats have steadily escalated to an all time closeness to doomsday.

How did this nearly 30-year decline happen? Evidence points to the expansion of NATO and the USA foreign policy of perpetuating wars.

I believe that Russia is not our enemy, we are. To explain, I recommend three videos online. The first is in English, and two are in Russian on YouTube. 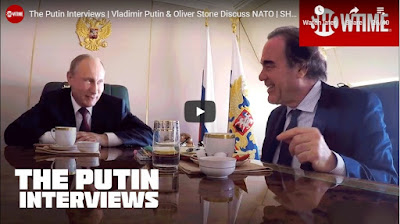 2. В Борьбе за Украину. Нерассказанnая История Украины;(2019) [The Struggle for Ukraine. (or) The Untold Story of Ukraine]. (Russian: 83 minutes), by Oliver Stone. (Wikipedia Russian) — The film shows how the USA and the West were directly involved in the 2014 Maidan coup in Ukraine. Snipers killed 100+ people to entice Ukraine and Western countries to blame Russia and President Putin. A tragic flop! Due to NATO circling Russia, the film concludes a higher probability of a nuclear war. Putin and his Ukrainian associate Viktor Medvedchuk are interviewed, and Professor of Political Science at the University of Ottawa, Ivan Kachanovsky, who for five years has been investigating this story.

3. Голливуд как источник мужество [Hollywood as source of manhood], Бесогон ТВ (Besogon TV), Channel 24. (Russian, 55 minutes). — Explains how Mikhail Gorbachev and Boris Yeltsin sold out the USSR to the West on the promise that the West was ready to help the Russians, instead the USA wanted to destroy Russia. While the USSR disarmed and became ‘pacifist’, USA did not. USA propaganda claimed to spread ‘freedom and democracy’ but murdered tens of thousands, fooling most Americans to believe they were ‘victims’ of the uncivilized ‘them’ — like heroes in a Hollywood movie. On March 1st, 2018, Putin was reelected President of the Russian Federation, with a majority 77% of the votes. Due to the broken promise, on that day Putin announced the development of superior atomic weapons, so as to wake the sleeping world up to what is happening today. Narrator Nikita Mikhalkov shows that Hollywood created fictional heroes who defeat 'Chinese, Russians, animals', and others in the interests of the American Empire. War is shown, not 'democracy'. In contrast, Putin says the real heroes were those who lost their lives defending their motherland.

Posted by Koozma J. Tarasoff at 16:27 No comments:

Peace Trek from India to Switzerland

A year-long trek for 'Justice and Peace' begins October 2, 2019, in New Delhi, India. Participants will march about 6,214 miles for 370 Days, crossing 16 countries, to Geneva, Switzerland, arriving on the 22nd of September, 2020. A part of the trek is happening in Canada.

In the Hindi language, Jai Jagat means 'victory to the world', 'victory to the planet', 'victory to all'. It also names a series of grass-root marches — 2007, 2012, and Jai Jagat 2020 — to address poverty, discrimination, climate crisis, and healing conflict and violence — the 17 Sustainable Development Goals.

Details of the Jai Jagat 2020 trek were presented at a slide-lecture hosted by the Mahatma Gandhi Peace Council, held at Carleton University on June 15th. About 30 attended. I took photos.

Trekkers will pass near Doukhobors in the South Caucasus, and board a ship at Batumi, Georgia, the same port where many Doukhobors left Russia beginning in 1898, eventually arriving in Canada. Most Canadian Doukhobors still use the pre-1920 Russian name Batum for Batum Oblast (province) and city. The original plan was to walk around the Black Sea through Russia and Ukraine, but Russian officials are 'not interested' in allowing this march through their territory.

Dr. Jill Carr-Harris is Canadian with Ph.D. studies from the University of Toronto, who lived for 30+ years in India. She teaches peace and Gandhian nonviolence, and is married to a like-minded Indian peace activist who is the leader of Jai Jagat 2020. She came to Canada to promote the events, raise funds, and meet with family and friends before she begins the year-long walk.

Dr. Carr-Harris opened her 1-hour lecture exclaiming Jai Jaget!, a greeting used in India 'to recognize each person as a member of the universal family' — 'an act of peace'. In her first lecture slide, she labeled the trek 'A Global March for Peace'.

In 2017 she introduced the Jai Jagat 'campaign' in Ottawa, and has returned to 'update' the news and 'get some people engaged' — 'grassroots ... action'.

In 2014, I met her husband Rajagopal P. V. in Ottawa, Canada when he and Jill came to introduce their early plans for these treks.

Both husband and wife view human behaviour as basically good, but we need to support ways to assure global survival for all living things — ‘not just making money’ for ourselves. In our most difficult moments, nonviolence training teaches us to be compassionate, must be used to 'organize society', and be integrated into all the higher academic fields (sciences and humanities). 'A Gandhian perspective ... educating young people ... to get them to think about peace and nonviolence'.

Jill Carr-Harris stated that the late Murray Thomson and UN Ambassador Doug Roche are the 'grandfathers of peace' in Canada. Roche 'said we are moving from a culture of violence, a culture of war, ... into to a culture of peace ... but, there are small ups and downs'.

Her slides are not shown on the web except in this video, and are included here.


Dr. Carr-Harris reported that 50 people have committed to walk the entire 10,000 kilometers. Everyone is welcome to join and leave at any place and time. Many peace groups along the route are organizing partial marches, joining the permanent marchers for a few kilometers. Many not on the main route from India are planning local marches. some to join the movement in Geneva. European countries are accommodating marchers with special visas. Peace organizations around the world can recognize and join in the global effort. First Nations are now marching from New Brunswick to Maine, USA, before winter.


Her final announcement was that a 'Peace and Non-Violence Department' is being planned in Rajasthan, India. It precedes our Canadian Peace Initiative for a similar government department.

Posted by Koozma J. Tarasoff at 04:25 No comments: