Doukhobors in Georgia: to stay or move?

In southern Georgia near the border with Armenia and Turkey, many Doukhobors relocated here in the mid-19th century. Here in Ninotsminda, formerly the Bogdanovka District of Georgia, historical monuments are preserved of the difficult history of the Doukhobor movement. Today, nearly two centuries later, most Doukhobors moved to Russia, and many fear that the history of the Doukhobors in Georgia is coming to an end. Correspondent, Nina Akhmeteli, BBC Russian office.
The report is excellent for its stark images, good interviews, very good articulation in the Russian language, and a tone that is neither gloomy nor optimistic. Villagers are shown herding and milking cows, and during a Sunday meeting. The cave and cemetery are toured. 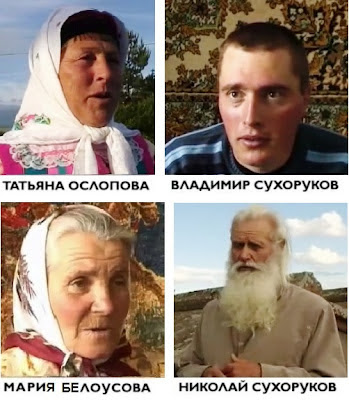 Dressed in traditional Doukhobor clothes, Tatiana Oslopova tells how a few elders come to the Sirotskoi Dom (Orphan's Home) on Sunday to 'meet God' and pray together.

Maria Belousova describes how Doukhobors once had a thriving milk economy, but now most the Doukhobors have moved away, including her family. She sold her cow, survives on her garden, and wants her daughters to return to their homeland.

Young Vladim Sukorukov of the village of Gorelovka sees no future for Doukhobors here unless something unexpectedly happens.

Bearded elder Nikolai Sukorukov visits the cave (peshcheriska) near one of three 1895 Arms Burning sites, then the cemetery (mogilitchki) in Orlovka. He came to the area 30+ years from Tbilisi, says he sees hope that the area pulls people back to their homeland.

The reporter concludes that almost two centuries after the Doukhobors were exiled from the Milky Waters area in 1841, many now fear that the Doukhobor history in the Caucasus is rapidly coming to an end.

More about Doukhobors in Georgia.
Posted by Koozma J. Tarasoff at 12:49 3 comments:

Note: The following is an open letter to the Canadian Broadcasting Service with a plea to correct its stories on the Doukhobor Movement.

I am a regular listener to The Current, your excellent radio program on the Canadian Broadcasting Corporation (CBC). For decades my family considered the CBC as the 'gold standard' in journalism.

However, in the morning of August 7, 2012, Jim Brown hosted a documentary called 'An Apology for the Doukhobors', with an 20-minute segment by freelance journalist Kalyeena Makortoff, testimonies by several New Denver Survivors, and an interview with Dulcie McCallum, former Ombudsman for British Columbia who investigated the Survivors civil rights complaint 13 years ago in the interior of BC. The story began as follows:


'During the 1950s, Doukhobors in the Kootenay region of British Columbia rejected the provincial education system and refused to register births, marriages and deaths. They would march naked, home-school their children and set fire to buildings ...'

The story is very familiar to me because as an anthropologist, historian and published author, I have studied the Doukhobors for over 55 years.

I have already critically reviewed Makortoff's earlier story pointing out the genuine trauma of the children who experienced the New Denver Residential School from 1953 to 1959. (See: Review of News Article about Residential School Apology, 24 May 2012). I pointed out the need for (1) their parents to apologize for opposing their children from going to public school, as well as (2) for the government to apologize to all Doukhobors for mislabelling them as nudists, arsonists and bombers.

To maintain your high standard of journalism, please correct the following which I have found to be lacking in your current story:

You are no doubt aware that the media can make or break a story. Since the early 1900s, the Doukhobors have been maligned and misreported by much of the mass media. Largely, this has been aided by extremist elements, addicted to sensationalism, who are not Doukhobor in behaviour, such as those who strip, burn and bomb. This is an addiction of a real kind and a hijacking of the wider Doukhobor Movement. Yellow journalists find these stories attractive because they sell papers and make money for their owners — but it is bad journalism and is discriminatory.

Surely, CBC has a higher standard of truthfulness, fairness and balance than the yellow press! The Current is one of the flagships of your great public institution. Surely, you need to become educated on the Doukhobors, one of Canada's minority groups. Surely, you ought to distance yourself from the hijack model used by some of your competitors and fuelled by extremists with their own agendas. It is time for CBC to live up to its calling as a truly national institution that 'informs, enlightens and entertains'.

For  more information on the Doukhobors, see my 2002 book Spirit Wrestlers: Doukhobor Pioneers' Strategies for Living, as well as my websites Spirit-Wrestlers.com and Spirit-Wrestlers Blog.

In search of truth and fairness,

We received your letter in CBC National Audience Relations where we respond to audience correspondence. Thank you for sharing your views with The Current, CBC Radio 1.

On August 7, 2012, you wrote that you listened to The Current (hosted by Jim Brown) where you heard a presentation about the Doukhobors.  You wrote that you did not agree with some of the viewpoints presented on the show and you also shared information in your letter, that you felt was "lacking" in that report.

We have noted your comments in our weekly national audience reaction report that is circulated to executive and production teams across Canada. They will be made aware of your concerns on this subject.

We also appreciate that you have taken time to share your views with The Current and CBC RADIO.

I appreciated receiving a response from the CBC about my comments on a Current program hosted by Jim Brown. It is good to know that CBC cares for its listeners.