In front of Library and Archives Canada, 20 Raging Grannies protested the ‘muzzling’ of federal scientists, librarians, and civil servants from speaking freely in a democracy. Several came from Montreal to join their local colleagues in this rage-fest. See 83 photos of the Raging Grannies protest.
﻿
The Grannies staged a street theater. A masked actor playing Stephen Harper, Prime Minister of Canada, gagged a scientist, a librarian and a backbench MP with red and green tape.

‘When you shut down inquiry,’ said Granny Bessa Whitmore of Ottawa, ‘you don't have democracy. We know what happened in the 1930s in Germany, and we don't want that to happen here.’

Bessa lived through the McCarthy era of the Cold War and wants to ensure that this period is not repeated. She spoke for all the Grannies when she said: ‘We must take action now. We cannot be silenced.’

Their signs reinforced their message: ‘Don't be Muzzled. Make Noise!’ ‘Take Action Against Muzzling!’ These words from the song of the Raging Grannies say it plainly: ‘We're demanding free expression. This is unbearable oppression. Harper, you need to learn your lesson. Just let them speak out loud!’ 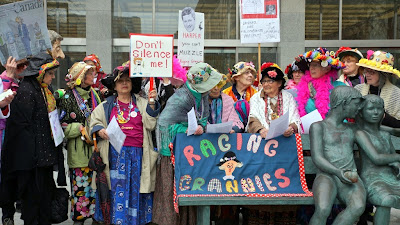 According to the Ottawa Raging Grannies website, the first group to call themselves 'Raging Grannies’ arose in the winter of 1986-87 in Victoria, British Columbia. Several peace activists who were doing street theater began to strategically dress up in outrageous hats and sang satirical songs of protest.

The Raging Grannies franchise spread across Canada and into the United States. Each group changes the words of familiar tunes to suit their particular circumstances.

Ottawa co-organizer Granny Jo Wood says that the present Stephen Harper's Conservative government, elected since 2006, routinely requires political approval before scientists, and civil servants can speak to the media about their scientific findings. ‘Muzzling is being used to shutting down dissent. The press is uninformed. Citizens are uninformed. We have to rise up against it.’ (‘Muzzling’ of federal scientists called a threat to democracy, by Margaret Munro, Postmedia News, February 20, 2013.)

Fisheries and Oceans Canada, Natural Resources Canada, Environment Canada, and Parks Canada have been warned about speaking to the public on identified issues such as climate change, the protection of the polar bear and caribou, and the pipeline. Not all scientists are muzzled, only those whose findings are unwelcome.

In 2012, Margrit Eichler of Science for Peace, pointed out, for instance, the Canada Science and Technology Museum was pressured by the Imperial Oil Foundation, which contributed $600,000, to change their exhibit about the oil sands. ‘They found the language too negative, were uncomfortable with the links between wars and oil, and objected that the exhibit showed changes in the landscape caused by oil mining.’

Dr. Eichler revealed that ‘Canada was a leader in government openness — now we occupy rank 51, behind Angola, Columbia and Niger, in terms of freedom of information.’

The best known example of interfering with scientific integrity of data collection is the abolition of the long census of Statistics Canada, and its replacement with a voluntary survey. With a voluntary survey, it is widely known that the information will deteriorate, especially for poorer groups such as Aboriginal people and disabled people.

Canada's first Parliamentary Budget Officer, Kevin Page, was relentless in his pursuit of government transparency. He was relieved of his post on March 22, 2013 (which he held since 2008) because of his persistence to provide independent analysis of government spending to parliamentarians.

A notorious area of secrecy and muzzling by the Conservatives is the military. The Harper government has blindly supported the 2003 invasion of Iraq, has crackdowns on government dissenters and liberal university professors, has wasted almost $1 billion in three days for security and other costs during the 2010 G20 Summit in Toronto, has allegedly been involved in mysterious robocalls, and has blatantly lied about the 65 F-35 fighter jets expected to cost tens of billions of dollars more than the official projections.

The Deptartment of Defence needs to began an urgent conversation with Canadians on what is the role of the military today in Canada. It needs to look at private member's Bill C373 to see how feasible it is today to create a Canadian Department of Peace in Canada. Only then can one ask what planes and ships are needed.

As Ottawa turns its attention to a handful of retired civil servants that are returning to the public service as well-paid instructors at a federal government management school, it is time to scrutinize an exponentially larger group of ‘double-dipping’ taxpayer-funded young retirees. It is very common for members of the military, for example, to retire in their 40s, often with 6-figure salaries, and to return as soon as the following week as a consultant or salaried civilian. Ex-military members then enjoy a decade or two of a generous pension topped up by a secondary salary or consulting fees, all fully funded by taxpayers. It is a long-standing practice but given its massive scale and our current climate of restraint, it is time for it too to be scrutinized and scaled back.

With the Raging Grannies, let's be inspired by their action against muzzling. Let's work for more openness and integrity in government and develop a new era of enlightened  and responsible leadership. Write letters to your Members of Parliament. No postage required. Join an on line campaign:
See 83 photos of the Raging Grannies protest.
Posted by Koozma J. Tarasoff at 21:44 1 comment:

There is one aspect of the Doukhobor history that has puzzled me. So far I have not found a historical summary about how the Doukhobors escaped being serfs. History reports that Serfdom was abolished in Russia in 1861. But it seems that the Doukhobors lived in communities as free families long before that. A short answer if you can.

In short, the overwhelming majority of 'our' Doukhobor forebears were 'free' peasants in Russia and not members of, the serf class. In other regions of Russia, many Doukhobors were serfs.

Most of 'our' Doukhobors (those belonging to the major grouping of Doukhobors who settled on the Molochnaya in the early 19th century and the Caucasus in the latter 19th century) descended from free peasant classes — odnodvortsy (smallholders), and Cossacks, state peasants and meschane (the townspeople), in the late 18th century.

As the classes were free to travel, they were more apt to proselytize among their Orthodox neighbours, thus 'infecting' them with their heresy. They were severely persecuted for doing so, but that did not stop them, and the Doukhobor faith 'spread across the steppes like a wildfire' during this period. The cruel punishments were replaced by a more 'humane' policy of resettlement, isolation and toleration (i.e., exile). These Doukhobors were quarantined in frontier regions of the Russian Empire where they would not infect the Orthodox, and in doing so, they helped colonize these regions.

That is not to say that there were no serfs at all among the Doukhobors on the Molochnaya and in the Caucasus, however, in most cases, they would have been escaped serfs from their landowers' estates, army deserters or exiles; in any case, serfs comprised no more than 1% to 3% of this major grouping of Doukhobors.

Elsewhere, across the Russian Empire, the Doukhobor faith appeared among the serf class, however, there is little documentary evidence about them. Doukhobor serfs were not permitted to join co-regligionists along the Molochnaya at the beginning of the 19th century. As a result, the majority were doomed to remain in servitude on their masters' estates in northern and central Russia, or else were conscripted into the army (considered the equivalent of a death sentence) or exiled to penal servitude in Siberia, until Emancipation in 1861. Following Emancipation, it is known that some communities of Doukhobors and other Spiritual Christians formed in the Russian Far East, including the Amur region, were comprised of emancipated serfs.

For years I wanted to present my stories in video. Now I am doing it at age 81. My first short project is about my wife Kristina, then about Doukhobors.

I saw an ad for 'script-to-screen video production training for documentary makers and communication professionals.' The course offered 'hands-on' experience in making documentaries. Just what I needed. I enrolled in the first Doc-School held in Ottawa in March — Video Storytelling 101 — a flexible 10-day course.

The founder of Doc-School and our teacher, Peter Biesterfeld was born in Soest, Germany. He has 35 years of experience in documentary film-making at Algonquin College, Carleton University, CBC, CTV, and in private business. He recently moved to Toronto where he is working on his current documentary: 'Anarchists and Activists'. I want to learn to do that.

I was pleased to meet three interesting classmates. We all have Eastern European roots. Ken Bilsky Billings began video in 1982; his father's ancestors came from the Crimea, Ukraine. Diana Watt is Manager of Special Programs in Education at the Ottawa University; she was born in Mission, British Columbia where she got to know the Doukhobor speaker/author John Kootnekoff ('Koots') who is a close friend of her father William Ordog (Hungarian). Patricia Palulis (Lithuanian) is Associate Professor of Education on sabbatical from the University of Ottawa.

Our first lesson was to study documentaries online. I was most impressed by John Pilger, an independent journalist who speaks about complicity and compliance, censorship and citizen journalism, and the Iraq holocaust. See his Media and the War — Challenging The Consensus as well as the history of 'embedded' and independent reporting in The War You Don't See (2010).

We make videos as a team, and each must produce and edit their own 5-minute project. Ken was already writing and editing 'The Story', a profile promo of an Indian residential school survivor and writer. Diane is making 'WAM — Women, Action and the Media'. Patricia is working on 'Cinema Academica' and its interesting origins at Ottawa University. My project is 'Kristina — A Bulgarian Star in Canada'.

To stage and shoot my segments, everyone came to our residence. We shot Kristina showing how to cook banitsa, a classic Bulgarian pastry dish, and my interview with her. It took us eight hours of team work. Everyone had a chance to use professional cameras and rotate jobs.

We ended the night with home-cooked Russian Doukhobor borshch, Bulgarian banitsa and other dishes, lavished with Slavic hospitality (photo above).

Because this was the first of a series of DocSchools that Peter Biesterfeld plans to organize across Canada, I volunteered to make many photos for publicity. I support this low-cost effort to train citizen documentary filmmakers like us. See my photo album about the 10-day DocSchool Spring 2013.

DocSchool hopes graduates will form a collaborative community of serious documentary video producers. Arrange classes for yourself or a group via the website doc-school.ca. Master Peter can help you 'change the world' by creating effective documentaries that speak to the condition of the day. With professional coaching, you can learn much on your own.

Here are some of my insights from the 10-day course:

In summary, the 10-day course highlighted the need for dedicated citizen videographers to inform others and to ensure that out society survives as a just, clean, caring, friendly and beautiful entity.

For me, the course provided the preliminary skills and confidence to pursue the video projects that Kristina and I began 20 years ago — with my Doukhobors and her Bulgarians. Thank you Peter!