Jonathan Kalmakoff's latest research article of 275 Doukhobor-invented surnames has been published in a scholarly European journal specializing in names.

Jon says: "This project has been a 'labour of love' of mine. It was written over the past two years while I have been off-work and housebound, battling kidney failure. However, the research underlying it covers over twenty years of painstaking archival research and countless interviews with Doukhobor elders throughout Canada, Russia, Ukraine, Georgia and Azerbaijan." 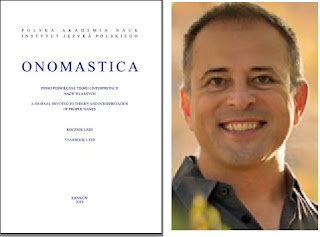 Kalmakoff, Jonathan. "Ulichnye Familii among Doukhobors of the Caucasus and Canada," Onomastica (Vol. 63, 2019), pages 67-114. Onomastics is the study of names.

In Russia, Doukhobors lived together for generations and intermarried so much that many people had the same or similar names. To separate people by name, more names were needed, a nickname, or a surname based on some distinguishing characteristic. Jon lists 275 new family identities, most brought to Canada. This list should help many who are confused trying to research their family tree.

Such made up names in Russian genealogy are called "on the street names" (уличные фамилии : ulichnye familii), to distinguish them from official written names. Learn more at Yandex.ru and Google.com.

The 275 Doukhobor "street names" are alphabetically listed with details on the last 24 pages of the 47-page article. More than 100 references are cited on 4 pages, including 24 from Russian archives. Several of the works cited have not yet appeared as sources in print. I also count 45 people contacted by "correspondence" plus 8 interviews.

In November 2000 Jon mentioned the topic on his web page "Guide to Doukhobor Names and Naming Practices" (updated Aug. 2010) in the last section about "Family Nicknames" and how to notate people with two surnames.

Other cultures also created ways for identifying people with such names. French, Italian and Scottish use "dit" names. Germans have "sippe" names. Scots and Irish use "sept" names. Spanish-Catholic cultures avoid confusion during baptism by assigning the family name of both parents plus more if needed.

Dmitri (Jim) Popoff, Grand Forks BC, who helped Jon with research, complemented the published article: "Congratulations on having it accepted by such a prestigious and scholarly journal, that specializes in the very genre of your article. ... I'm ... once more struck by the depth and breadth of the encompassed data, and the conscientious attention to all pertinent details. ... (and) ... impressed with the general high level of accuracy and authenticity."

Popoff also corrected two References mistakenly attributed to his father Popoff, E. A. instead of him, by a single letter typo. John apologized. Both historians were so absorbed with the draft article content that neither noticed the changed initials at the end. The References should read:
Find a link to Jon's new article and more on his genealogy Facebook page, and much much more on his Doukhobor Genealogy Website.
"Street names" among non-Doukhobor Spiritual Christians
(Dukh-i-zhizniki, Molokane, Pryguny, Subbotniki, etc.)

Most name changes after migration were to hide their Russian origin in America during times of fear of Bolsheviks, Communists, Reds, and Soviets during the Cold War. My father called himself Conway for a while.

Only a few changed surnames due to unfortunate spelling. A popular oral history example is about  the Russian surname Yurin. Most were spelled "Uraine", but whose who got "Urin", pronounced like "urine", changed to "Wren".

In Russia, my wife's grandfather and a few brothers created their own "street name" still in use. He was born Vasili Antonich Samarin, among 9 brothers and 5 sisters. Most all were Molokane in Ol'shanka village, northern Kars province, neighboring Dukhobory. They lived among too many other Samarin clans of mixed faiths. He and a few brothers decided that they should have a different surname. They chose the name of a rich village elder — Sergeev — who had no nearby relatives, and maybe they would prosper with that surname.

Posted by Andrei Conovaloff at 18:28 No comments:

Get the Veregin Centennial Video for $25 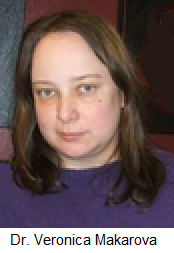 The National Doukhobor Heritage Village is pleased to announce that a six-CD recording of the historic 100th anniversary celebration of the Prayer Home, held in 2017, is complete and ready for distribution.

The production was guided by Dr. Veronika Makarova, an Associate Professor in the Department of Languages and Linguistics and the Interdisciplinary Linguistics Program Chair at the University of Saskatchewan. Dr. Makarova also supported the funding of this project through her research funds and the NDHV is exceedingly grateful for her leadership in this initiative.

Those who attended this celebration will enjoy re-living the remarkable celebration of toil and peaceful life, experienced through prayer, fellowship, song and food.

The collection is available for only $25.00 for the set to cover handling costs. However, donations are always welcome to continue supporting the work of the Village.

To order this exceptional documentary series, you may: contact the Village at 306-542-4441; write to Box 99, Veregin, SK SOA 4H0; or email ndhv@yourlink.ca.
See event program, history and news:

Posted by Andrei Conovaloff at 19:03 No comments:

Ron Kalmakoff back in Saskatchewan

This year, singer Ron Kalmakoff returned to his hometown of Canora, Saskatchewan, to visit family and friends; and to produce and promote his new songs and videos dedicated to his Doukhobor grandparents.


His musical career began in Canora at age 16 when he entered the annual June Days talent show. That performance helped break his shyness. At 19 he recorded his first album, and so few were made it is now a collector's item. Local radio stations invited him to play live, which led to TV appearances and meeting a few professional country-western singers, and joining a band. He was hooked on writing and performing his own music. At age 24 he moved to British Columbia to learn and work in the music industry.

For his recent album dedicated to his grandparents, Kalmakoff revealed:


"The best way for me to describe the song is, when you start losing generations of your family who have come before you, you start analyzing who you are as a person, .. I had to make it soulful but also channel my Doukhobor roots, you can hear that in certain sections of the song. I put myself in a space while recording where I starting thinking back to some amazing voices and singing I’ve heard over the years from my culture and that helped me connect to the song.”

"Ron Kalmakoff- Ever Since You Went Away" (Official Music Video) Youtube (6 min.) Oct 26, 2019. — Opens with Lord's Prayer in Russian. Walking and aerial images of Veregin and Canora SK Dedicated to his Grandparents, Lorne & Anne Dergousoff, Canora SK, with Doukhobor images and psalm.