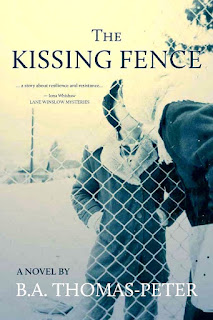 This book is one of the first to specifically examine how the Canadian government abused the children of Sons of Freedom (Freedomites) in the 1950s, leaving them scarred with extensive mental health problems for generations. It fills a gap in Canadian history that only a specialist can explain.

The author is a Canadian clinical and forensic psychologist, educated in England. He retired from the post of Provincial Executive Director of Forensic Psychiatry for BC, and consults and writes from his home on Vancouver Island. His publications focus on mental health and elder care. He chose the New Denver survivors as subjects for this book to deliver a broad message about how to improve mental health services in Canada for the afflicted Sons of Freedom and thousands of others like them who have been ‘scarred for life’ by bad public policy. Dr. Thomas-Peter covers identity crisis, schizophrenia, changed names, and suicide.

This fictional novel is about two children, a boy and girl, whose parents rejected government schools. The parents were ‘Sons of Freedom’ who wanted schools that teach their heritage values of peace, social equality, community, and harmony with nature. Their wishes were rejected by the provincial government of British Columbia that strongly enforced an assimilation program for children of dissident immigrants and First Nations. Through these fictional kids, the psychologist explains how bureaucratic government officials have inflicted widespread, long-lasting damage.

This is essentially a work of fiction. Dr. Thomas-Peter has a right to say whatever he likes in fiction, except when he wrongly converts his text into a fact that we are henceforth speaking of Doukhobors not Sons of Freedom. He mixes apples with oranges without knowing it and becomes responsible for doing harm to Doukhobors. There is a no-win situation here if we look at this strictly as a creative piece of writing without commenting on the wider relationships.

Beginning in 1954 the police were ordered to raid Freedomite houses in the Slocan Valley at night, seizing screaming, crying kids, and delivering them to a court ordered boarding school in New Denver, a former internment camp for the supposedly enemy-alien Japanese. Their forced education program ended in 1959.

The author's storytelling is well done with careful attention to details and sensitivity to the characters. The pace of the story created suspense by alternating chapter topics from one end of the interior of BC to the Pacific coast. With great sensitivity the author described police raids on villages to enforce the School Act, life in exile in the dormitories that once held Canadian Japanese arrested during WWII, a car bombed in Castlegar killing one of the New Denver survivors, the son’s involvement in an illegal gold smuggling ring in Vancouver, the appearance of an owl as an omen of life, and fates of family members scattered across British Columbia.

Though Dr. Thomas-Peter tried his best to research the subject matter, immigration history, and personally interviewed several Freedomite New Denver survivors, he failed to understand they were no longer authentic non-violent Doukhobors.
Since 1902, some zealots used nudity, fire and explosions among immigrating Doukhobors to protest the government negating the original immigration agreement, and controlling their lives with new requirements. Freedomites were not members of the incorporated Christian Community of Universal Brotherhood (CCUB), the 'Orthodox' or 'Community' Doukhobors. Freedomites formed separate, adjacent fragmented tribes that harassed the CCUB, the wider public including the Doukhobors and government.
Though the author appears to acknowledge the difference between Doukhobors and Freedomites, he confuses the average reader by using the label 'Doukhobor' 4.5 times more than their actual label ‘Sons of Freedom’. He mixes the ‘apples’ with ‘oranges’ so much that the general reader would not know which group is which. Moreover, he is dealing with essentially less than 5% of the population of the study group as compared to 95% of the Doukhobors.

But there was one major flaw that many authors before have made over the past century. It is about the parable of the Blind Men and an Elephant which originated in the ancient Indian subcontinent, from where it has been widely diffused. It is a story of a group of blind men who have never come across an elephant before and who learn and conceptualize what the elephant is like by touching it.

The big elephant here is the Doukhobor Movement. Most of the parents of these children were not Doukhobors because they transgressed the basic tenets of nonkilling by burning public structures and their homes, as well as bombing private property. Nudity was added to the mix. When arrests were made, many made an excuse that they were the rightful owners of the Doukhobors, but in fact they were hijacking the Doukhobor movement as their own.

This hijacking maneuver is one that I as a scholar have been striving to uncover for over 65 years. The mass media is addicted to it, while many readers have been conditioned to believe this falsehood. This is propaganda in action.

I am delighted to review Thomas-Peter's fiction novel, but the famous peace activist song keeps popping up in my head, 'When will they ever learn?'

Yes, this is supposed to be a novel — yet why did the author in the front piece of the book as well as in his Note (p.279) dedicate the book to 'the Doukhobor people of Canada'?  Obviously the author has not looked at the full context, but remained captive of the Blind Men and the Elephant.

The learned professional slipped from his novel pedestal to that of history, contributing to harmful fake news. I am sorry that Dr. Thomas-Peter did not read any of my major works on the Doukhobors before he wrote his book, where he would have gained an understanding of the historic context. The fictional individuals that he was writing about were no longer authentic non-violent Doukhobors.

I strongly empathized with the plight of the zealot children at New Denver, but wish to look for the truth in the wider ecological context where relationships do matter.

When will they ever learn to look at the wider truth of the Doukhobor Movement? As a start, have a look at the following sources:
Posted by Koozma J. Tarasoff at 18:44 No comments: