Over 100 concerned citizens in Ottawa marched to the Chateau Laurier Hotel on February 23rd to protest the hosting of the 'Conference of Defence Associations' in the Canadian capital. The march was organised by the Ottawa Peace Assembly who say that the military gathering is part of the planning phase for an attack on Iran. 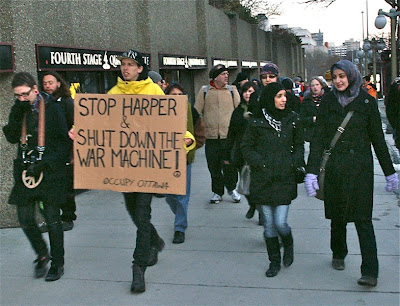 The meeting in Ottawa of war profiteers, the Harper Government, and top military commanders from Canada, the UK and the US indeed appears rather ominous, resulting in a response from the activists. Their poster reads: 'Don't attack Iran. They lied in Iraq. They're lying about Iran. Don't let them do it again. Stop the war of 2012. Protest the war machine.'

As I walked with the marchers, I heard the following wisdom in the chanting:
'Stop the killing. Stop the hate. We don't want your racist war.'
'What do we want?' 'Peace.' 'When do we want it?' 'Now!'
'Health care. Child care. Anything, but Warfare!
'We need peace and prosperity, not war and austerity.' 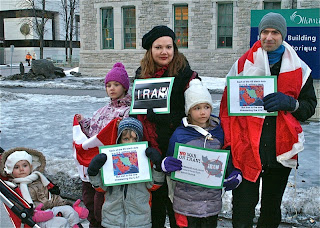 A flyer stated: 'The Harper government is beating the drums of war against Iran, while spending millions on massive celebrations of the War of 1812, and $490 billion on militarism, all while attacking our cherished public services and falsely claiming there's not enough money.'

To emphasize the human tragedy of wars, the activists staged mock deaths outside the doors of the conference. (See a video clip from Press TV).

As a concerned Canadian, I support the move to Stop the war of 2012! (In fact, it is time to make war a crime against humanity.) As citizens, we ought to cease this drum beating and instead develop an architecture that prevents violence and wars. The creation of a cabinet level Department of Peace in Canada would be a good step in this direction. See Private Member's Bill C-373. Within its mandate would be the establishment of a Civilian Peace Service responsible for training peace professionals to work at home and abroad.

Parliamentarians, listen to reason. What are you waiting for?

The meeting sponsors, the Conference of Defence Associations (CDA) founded in 1932, is the oldest and most influential advocacy group in Canada's defence community and plays a leading role in setting the country's military and security strategy.  It receives funding through a grant from the Department of Defence. Since 1987 the CDA has created an outreach arm called the CDA Institute to 'research, to inform, to educate, and to promote informed debate, awareness and understanding of security, national defence and development issues.' For this purpose, the Institute conducts conferences, seminars, roundtables, meetings; promotes research activities, sponsors awards such as the Vimy Award; and publishes a range of magazines, papers, and educational/informative documents.

The USA, Israel, Britain, Canada and some of their Western allies accuse Iran of pursuing a military nuclear program of mass destruction. However, as a signatory to the nuclear non-proliferation treaty, Iran maintains that its nuclear program is for peaceful purposes. This unclear situation has resulted in much of Western media demonizing Iran which has become very similar to the lead up to the Iraq War.

I am responding to correct the  reference to the Doukhobors in Meghan Murphy's article 'The Naked Protestor (or How to get the Media to Pay Attention to Women)' (rabble.ca, January 21, 2012).

Nudity was first used at the beginning of the 1900s in Canada as a form of protest against injustice or perceived injustice. When the public was shocked, nudity became a quick and easy tool of embarrassing the 'guilty one'. The nudist soon learned that the quick way to get public attention, especially through the media, was to strategically strip naked at moments of disadvantage.

It was the extremist zealots or Sons of Freedom, so named in the early part of the 1900s who earliler split from Doukhobors to form a different group, used nudity as a form of protest along with destruction (fire, dynamite). The press and Ms. Murphy continue to mislabel the extremist Sons of Freedom as Doukhobors, though they are not the same.

Please understand that nudity was NOT a genetic part of the Doukhobor social movement. Nudity was used by a relatively few people, whom I have called 'zealots'. In quick time, these zealots (men and women) quickly got addicted to this tool and in a real sense hijacked the mainstream Doukhobor Movement. The media also followed suit as did many scholars who failed to distinguish zealotry from the main group.

See my book Spirit Wrestlers: Doukhobor Pioneers' Strategy for Living (2002) for many insights into the Doukhobors. Also read my website Spirit-Wrestlers.com.

Yesterday I was reminded by a psychology professor from California that 'culture must be handled with great delicacy and sensitivity' because it is easy to make an offense. Let's use this reminder when dealing with Doukhobors or any other group.
Posted by Koozma J. Tarasoff at 07:59 3 comments: