A Window On Our Doukhobor Soul

This pastel painting of the 1895 Doukhobor Burning of Arms by İsmet Koyuncu, a retired art teacher in Kars, Turkey, was sent by Vedat Akcayoz, President of the Kars Culture and Art Association.

İsmet Koyuncu's painting is titled in English and Turkish:

Vedat asks for comments (positive or negative) about this painting which will be used to introduce his documentary film about Doukhobors to be finalized at the end of this year. Post comments at end of this blog. 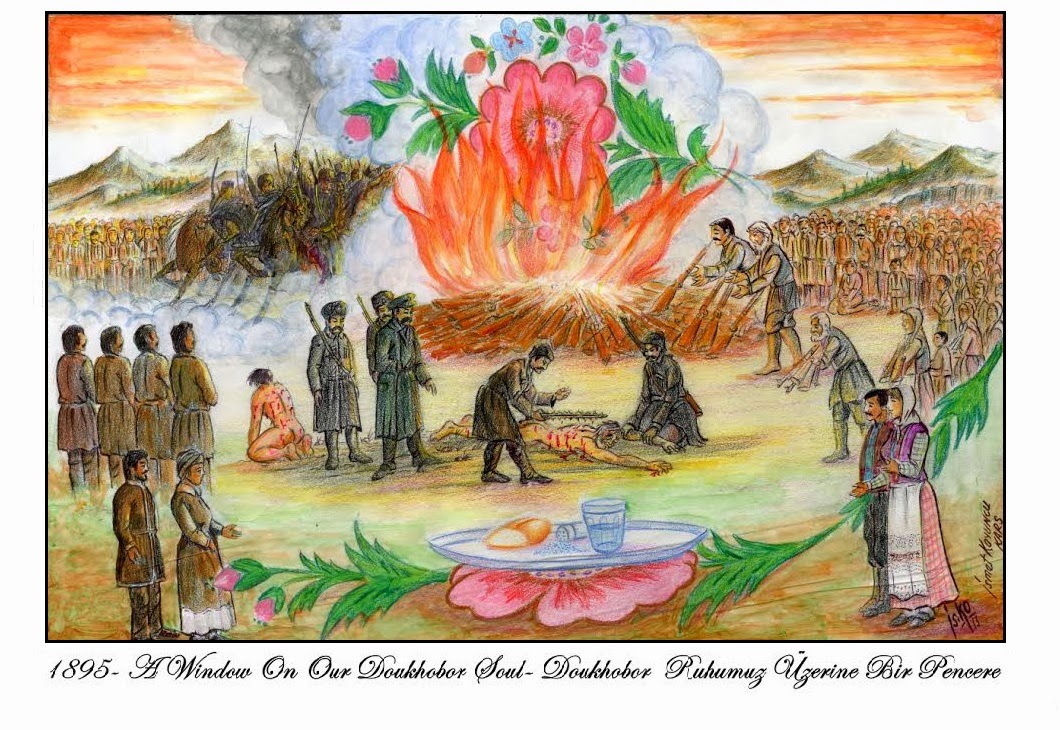 Vedat reports that İsmet's painting was inspired by the cover (below) on the 1995 USCC Union of Youth Festival programme booklet by Lisa Poznikoff, who drew a more abstract collage of Doukhobor history, centered around a flame that transforms into a flock of doves. In the painting above, the flame transforms into flowers, and the dark tone and images show the harsh reality of bloody whippings. In the foreground of both images are bread-salt-water with Doukhobors on both sides. İsmet's is sad with spilled salt and brutal soldiers, while Lisa's is happy with bright colors and kids. 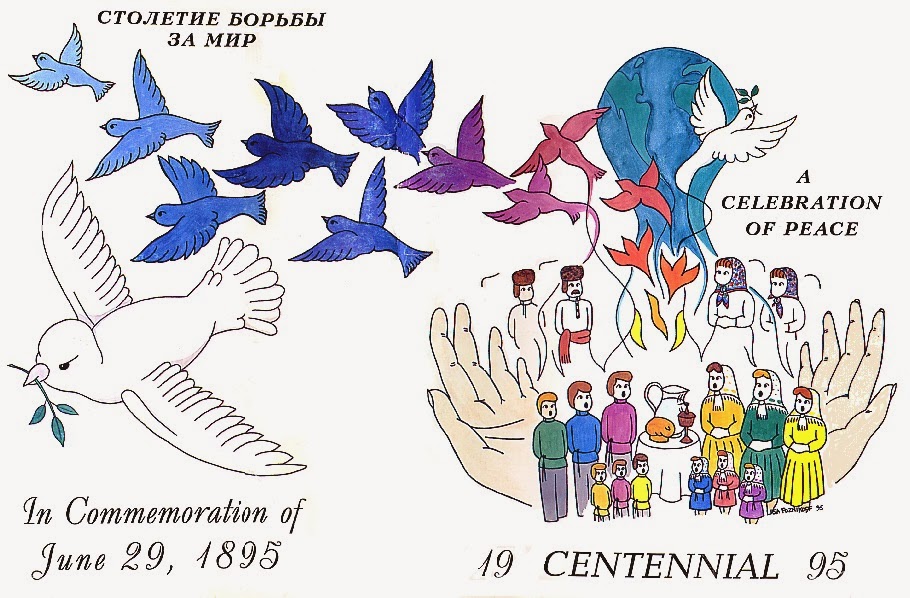 Both images depict the spirit of the day showing the forces of violence versus the forces of goodness. With the universal hospitality items of bread, salt and water (the basic staff of life), the message is one of Peace, Love and Understanding.

The painting is part of Vedat's Kars Doukhobor History Project first reported here in September. It will appear at the beginning of his documentary film, which will be produced in 3 languages — English, Turkish, and Russian.

This month Vedat returned from Azerbaijan where he tried to find the Slavyanka burning of arms site. He reported that he took toy guns to stage photos. News will be posted here when it arrives.

This is the 9th artist rendering I have posted of the 1895 burning of arms. If you know of others please send them in.

Approximately 7,000 Russian Doukhobor activists (including my grandfather) participated in the historic June 29, 1895 burning of arms event in three locations in eastern Europe, resulting in persecution, arrest, exile and the death of hundreds. This event (the first of its kind in world history) led to the migration of 7,500 (one-third of all) Russian Doukhobors to Canada in 1899.
———
More news from Turkey about Doukhobors.
Posted by Koozma J. Tarasoff at 10:33 3 comments: