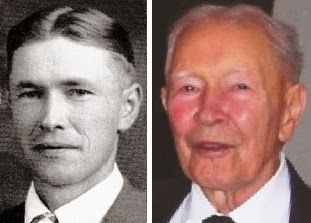 A very well-respected Doukhobor folk historian, writer, community worker, and family man has passed away at the age of  93.

His writings (including two novels) and his talks recall 'Doukhobor life concepts' which can be translated to mean a search for truth, justice, friendship and love.

For the Eli A. Popoff that I knew, the concept of Doukhobor was broader than Christianity, and very much in the thinking of Russian writer Lev N. Tolstoy as found in his Kingdom of God is Within You. Christ was a man, and the Bible was only a book.

For a staunch pacifist who believed in nonkilling, Eli fully respected his ancestral roots and sought to maintain ties of bridge-building between the East and the West. In this respect, he considered himself to be a citizen of the world.

From an early age, he listened to the stories of his father who was exiled to Siberia after the Doukhobors burned their guns in Russia in 1895. Eli recorded them on pieces of paper. Later he transformed them into essays, books, and talks. More biography: Remembering Eli.A. Popoff (1921-2014).

His passion was to pass the great legacy of our Russian ancestors to the young people ('our future') and to inspire them to follow the Doukhobor philosophy of seeking truth, love and peace. That legacy is as fresh today as it was in the 1800s.


Eli's son Dmitri continues to sell books from his former MIR Bookstore in Grand Forks, BC, thereby keeping alive the love of his father for the books in the family and in the Doukhobor community.

Eli's daughter Elaine (also a writer and poet) and husband Alfred Podovinikoff have constructed a large family home in the vicinity of Tolstoy's Yasnaya Polyana, Tula, as a continuing link between Russia and the West. Other members of the family, including grandchildren, are pursuing teaching, social work, and music careers. In their social and creative work, their father and grandfather will no doubt be missed a lot. (Yasnaya Polyana – a mecca for lovers of Tolstoy, Voice of Russia, May 15, 2010.)
For me, Eli A. Popoff was a mentor, a respected person who left an indelible mark on Doukhobor and Canadian society. His tireless efforts in preserving his heritage and doing creative bridge-building work between the East and the West will remain in history for future generations.