Although we haven't seen each other for years, we did meet a long time ago. While I have lived in Vancouver for a long time, I grew up in Grand Forks, and attended UBC. I continue to read your contributions to Iskra, and sense your interest in Doukhobor history.

I have run across an old reference to Doukhobors in a Toronto paper, and thought you might be interested, and might be able to solve a bit of a mystery.

First, some background. I lived in Toronto (1975-1985) and while there was a member of the Royal Canadian Curling Club. The club recently celebrated its 125th anniversary and decided to look into its history. It started as an athletic club and a bicycle club before transforming into a skating club, and finally a curling club in the 50's. The members also participated in other sports over the years, including baseball. ...

... In the summer of 1899, the Royal Canadian Athletic Club entered two baseball teams into a local amateur league. The names of the teams were the Lobsters and the Doukhoboers (sic). ... original newspaper clipping ...


R. C. B. C. Notes (August 3, 1899)
A baseball match was played on the ball grounds Saturday afternoon between the Lobsters and the Doukhoborers, all members of the Royal Canadian Bicycle Club. The playing on both sides was fierce, many brilliant stops and wild throws being executed. The features were the heavy hitting of the Douks and the poor fielding of the Lobsters. The following composed the teams : Doukhoboers—Messers. L. Saulter, H. Penguilly, W. Vennels, C. Walton, Geo. Cooper, R. Pringles, W. Fortescue, D. Logan, C. Lancaster, B. Leslie, and H. Salisbury. Lobsters—Messers. F. Prouting, W. Crocker, W. Booth, W. Cross, W. Hewlett, H. Lowman, T. Johnson, H. Thompson, J. Grieves, G. Abbott, and W. Simpson. The Douks won by 48 runs to 27. Messers. Pengilly and Pringle served up the snakes [pitched] for the winners, while Messers. Crocker, Booth and Johnson twirled [pitched] for the losers. A good afternoon's sport was the result and the boys will line up again on Saturday at 2:30 p.m.
Can Play "De Game."
It is quite evident members of the Royal Canadian Bicycle Club can occasionally play baseball. On Saturday afternoon the baseball team of the club journeyed to East Toronto Village where the engaged the attention of the G. T. R. team of that hamlet. A few words will suffice to tell the story of the battle : score—R. C. B. C., 21 ; G. T. R. , 3. Pringle did the twirling [pitching] and Abbot caught for the victorious Royals.


I don't know what to make of this reference. It's possible that the names were just fanciful, Lobsters being ocean creatures far from any ocean, or just ball players who "lobbed" the ball rather than throwing it hard. And Doukhoboers may have been a mis-spelled name picked out of the news, of a strange group of new immigrants to central Canada, or even a mixed reference with the Boers of South Africa since the Boer War was ongoing at the time. Or it could be something entirely different.

I doubt there is much of historical value here, but it is curious. I wonder if you have any interest in this, and whether you can shed any light on this oddity.

Glad to renew our acquaintance from many years back. Your story from 1899 is indeed interesting.

Why would a local amateur baseball team in Toronto call itself Doukhoboers? None of the players appear to be Doukhobors. That was the year that 7,500 Russian Doukhobors arrived in Canada, and the mainstream media published the story across the country and the world.

Perhaps someone heard about the group and out of a whim said 'that sounds like a good name for a baseball team'. Of course this is speculation.

A Google search for the spelling finds it in a 1903 book for teachers of blind students: The Association Review, Volume 5, American Association to Promote the Teaching of Speech to the Deaf, 1903, page 116 : 'Doukhoboers—A peculiar Russian religious sect'.

If any readers can help, please comment below.
See all Questions and Answers.
Posted by Koozma J. Tarasoff at 06:06 No comments:

I do enjoy reading your blogs, even if I don't always comment on them. My question today is this:

In Russian and Ukrainian it is spelled one way — борщ. Also in Belarus — боршч. All pronounced the same. No 't' at the end.

In English, I use and recommend the phonetic spelling — borshch — to my readers, because it follows the International Phonetic Alphabet (IPA) from Russian to English. For years I have tried to persuade the public to use this spelling. Thank you for asking.

The Yiddish German spelling borscht is probably more common English due to their huge population in the mid-1800s around New York, where the word likely first appeared in popular print and in dictionaries. See Etymology and History.

People can be confused when this term is phonetically transcribed to English from different languages — barščiai, barŝĉo, barszcz, borŝĉo, borş, borsch, borščs, borscht, borshch, borsjt, borsht, bortsch ... —; and misspelled — brosch, ...   For comparison also see: Q78: How Many Spellings of "Doukhobors"?

More confusing to outsiders is the many recipes. There are about 30 types of Ukrainian borsch. In Canada, each Eastern European immigrant group, sub-group, and clan has their own terminology and soup recipes.

Canadian Doukhobor borshch is a vegetarian soup made of cabbage, potatoes, tomatoes, onions, carrots, beets, dill, peppers, butter, and seasoning. More than 100 recipes can be found on the Internet.

Other versions include meat and/or lots of beets. Some add sour cream.

Here is my favorite recipe, from my mother Anastasia Tarasoff.

Melt butter in pan.
Add onion and cook at low heat for 5 minutes.
Add beets and tomatoes.
Cook at moderate heat for about 20 minutes.
Stir to prevent burning and browning.
Add cabbage and continue for short time.

Meanwhile, bring salted water to a boil.
Add potatoes and carrots, simmer gently ‘til potatoes are cooked.
Remove half of the potatoes and mash them.
Put mashed potatoes in frying pan.
Turn off heat.

Add frying pan mixture and these ingredients to the large pot.*
Bring to a gentle boil. Serve hot.


More
See all Questions and Answers.
Posted by Koozma J. Tarasoff at 15:05 No comments:

Q74: About Globalization, Assimilation and Symbols

My friends and I are doing a project in Social Studies on cultural groups and we chose to research 'The Doukhobors of Western Canada'.

We have a few questions to ask you guys if you don't mind:
You can answer any way you’d like personally, as a group or just your opinion. If you could get back to me as soon as possible that would be great.

Thank you for your time. 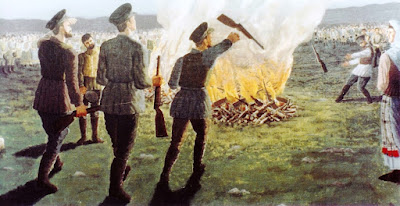 Please do not confuse Doukhobors with Sons of Freedom, or Freedomites, which naively done by too many students, professors, journalists, and readers.

The term 'globalization' is a recent concept involving the process of international integration arising from the interchange of world views, products, ideas, and other aspects of culture. As such most Doukhobors know practically nothing about it. However, if you extend the term to mean becoming part of one world community, Doukhobors have long had a view on this.

After their 1895 arms burning in Russia, Spirit Wrestlers / Doukhobors officially transformed themselves from a sect to a social movement. They consider themselves to be part of one human race and see no need to kill another human being, but need to cooperate together to deal with local issues nonviolently. For them, globalization involves treating people as equals and working to create a nonkilling peaceful world.

To maintain identity under the forces of globalization, extremist forces of assimilation need to be countered. This means respecting local languages, cultures and ways of doing things with simple respect, nonviolence, compassion, and trust in the genius of locality.

Vika, a young Catholic girl, and her mother Kiki became friends with Doukhobors in BC, and met John J. (JJ) Verigin Jr., Executive Director of the USCC. '...Vika asked JJ: "How can I become a Doukhobor? Can I be baptized or do I have to be born as a Doukhobor?" And JJ answered: "If you are loving and peaceful person in your heart, then you are already a Doukhobor!" Wow that sounded easy! But of course, we learned that it's every day work....' (Vodopoff, Kiki. "Why Are We Here?", Iskra, issue 2107, October 2016, page 18.)

2. Has there been a point where you’ve encountered the challenges of assimilation, and how have you conserved the culture these past years?

Most all descendants of Doukhobors in North America have adapted to Canadian life and integrated. To me the term 'assimilate' connotes a 'hate process of change'. I prefer the more friendly process of 'integration' which is more human. Integration affects every group as a process of fitting in as legitimate citizens of a territory or nation. Doukhobors have used many of the same tools as other groups in adjusting to the normal stresses of society affecting language and culture. See: 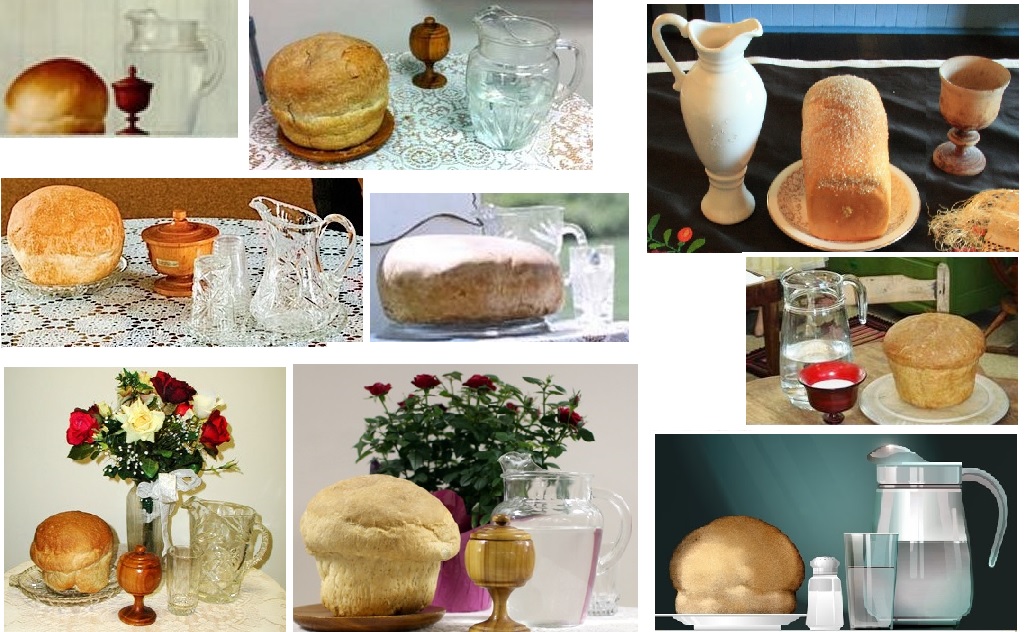 3. What are some important symbols to the Doukhobors of Western Canada? And if so, what are the meaning of the symbols?

Most important, in my opinion, is that most self-identifying Doukhobors around the world recall in annual celebration the three 1895 arms burning events in Tsarist Russia for getting rid of the institution of militarism and wars. This stems from their 'Spirit Within' which is the spirit of love, beauty, and God within each person; therefore we state it is wrong to kill another human being.

The most common cultural symbols enjoyed by all Doukhobors and shared with the public are traditional Eastern European foods (wood oven baked bread, borshch, pirogi, lapsha, vareniki, etc.), singing hymns and songs, meetings open to the public, and historic buildings and sites. Community Doukhobors in British Columbia, often display cultural symbols abandoned by Independent Doukhobors, like head scarfs on women; many homes display a small spinning wheel, hand carved large wooden spoons, weavings and/or other home-crafted essentials to their ancestors. Our museums, books and many commuity homes displays these items.

Historically Doukhobors have rejected icon worship and generally do not believe in sacred symbols (crosses, icons). However, as a heritage tradition, they have adopted the ancient Slavic practice of bread, salt and water serving as symbols of hospitality, equality, and peace. These items are placed in front of meetings as the basic staff of life. See:

More
See all Questions and Answers.
Posted by Koozma J. Tarasoff at 17:00 No comments: