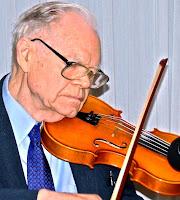 His passion to rid the world of atomic weapons of mass destruction was the theme of Murray Thomson's birthday Celebration 90 held December 4th at the Cartier Place Hotel, Ottawa.

In the afternoon a peace panel session 'Getting to Zero Nuclear Weapons: How?' was held. The serious discussions were followed by a gala dinner, good humour and a variety of music, highlighted by Murray on violin. See my 108 photographs with more details.

Dennis Gruending, a former Member of Parliament also attended and posted his excellent tribute: Murray Thomson peace activist at 90. Here I add from my personal recollections of Murray.

133 people attended, including heads of major peace organizations:
Since graduating from the University of Toronto more than 60 years ago, Murray has worked tirelessly to get rid of war. He is a Quaker, a co-founder of Project Ploughshares, a founder of Peace Brigades International and of Peace Fund Canada, and has received the Order of Canada, the Pearson Peace Medal, and other awards.

We first met in the 1950s when Murray worked as an adult educator in Saskatchewan, when a government led by CCF, the forerunner of the NDP, had come to power. He also worked at Qu'Appelle Valley Centre, which had been opened by Father Moses Coady, the founder of the Antigonish Institute in Nova Scotia, and a pioneer in the Canadian co-operative movement.

We met briefly again in the 1970s at the Grindstone Island Peace Education Centre, where Murray was one of the founders. Here my colleague Dave Haggarty and I organized four weekend summer workshops on family, community, and peace.

It was at the end of June 1982 that Murray and I met in Castlegar, British Columbia, at the first International Doukhobor Intergroup Symposium featuring Doukhobors, Molokans, Mennonites and Quakers. As one of the signers of a petition to the United Nations, Murray Thomson set out the task of peacemakers today — a view that was very much in the spirit of what he would say 30 years later in Ottawa on his 90th birthday. In 1982, he stated:


What is our task today? It is to make every effort to work both on the inside (policy changes, government budgets) and on the outside (mobilizing, sensitizing the public), knowing that our time is limited. To work both for disarmament and for social justice, Brad Morse, UNDP head, said: "To live, the world must disarm; to live decently, it must develop."

'First, we need to conceive, formulate and promote alternative systems of security, for Canada and the world. This involves:

'Second, we need to help our governments, and the UN, to move away from existing policies and budget towards alternative ones.
Outside (Public Mobilization)

'Equally, perhaps more important, is to intensify our efforts outside, in mobilizing the public.

'First, there is in Canada the Global Referendum campaign, which Jim Stark has presented so effectively, and all of the opportunities for public education.

'Second, there is the Ploughshares Campaign for making Canada a Nuclear Weapons Free Zone....

'Third, there is the Peace Tax Campaign...[which] is looking for support....

'Fourth, there are the efforts to enable large numbers of people to work on the problems of peace — both on the inside and outside kinds. One way is to persuade our government, to support the Waldheim Proposal for 1% of our Defence Budget for disarmament research and education. Another related way is to persuade Canada to pledge one million dollars to the newly launched World Disarmament Campaign....

'In Conclusion,...we need a revolution in our way of thinking about the world, new attitudes for the Atomic Age and new methods for solving the technical problems of the late 20th century....' [Koozma J. Tarasoff (Co-ordinator and editor), Symposium Proceedings..., Grand Forks, BC: 1983: 58-59).]

Today in 2012, after 65 years in the peace movement, Murray Thomson has expressed the following urgency on his 90th birthday:
Murray, you are an inspiration to all of us!
See my 108 photographs with more details.