A new website was launched in Russian by Valerii Kalmykov on October 1st, 2014 — www.doukhobor.ru

His mission statement says: "… each person ... will be aware of themselves as part of one small but very important part of the history of his family."

He recently visited Doukhobors in Georgia and shows photos of the farm and in the home of his host Ivan Kazakov.

His library starts with the earliest extensive documentation of Doukhobors by Orest Novitsky in 1832 and will include other books he has scanned.

The video section appears to have 3 test videos. The first 2 are a popular, about Russian drivers:
"What to do when a neighbor down the road is acting aggressively?" The third, "Rolik" ("roller"), is a 2-second segment taken in Georgia. Expect these to be replaced with other videos.

In the past, he contributed several items to Spirit-Wrestlers.com.
Kalmykov's story is one of 32 (so far) biographies in-progress for Koozma's next book: Spirit Wrestlers: Doukhobor Pioneers and their Friends, an update of Tarasoff's 2002 book.
Posted by Andrei Conovaloff at 15:45 1 comment:

Educating ourselves and our youth about the huge advantages of peace compared to war is of utmost importance.

I am impressed with and recommend new resources and guides provided online by the United Nations Office for Disarmament Affairs, particularly the aids for Disarmament Education: Resources for Learning.

A short video on UN Web TV shows 3 boys performing a rap song (4.5 minutes) they wrote which was inspired by their disarmament lessons. The boys' creativity is appreciated when contrasted to youth playing war video games.

One item that caught my attention is the new book: Action for Disarmament: 10 Things You Can Do, by United Nations Department of Public Information, 2014. The book shows many ways people can engage in learning, and creatively use the materials provided online.


The book summarizes the history and modern uses of weapons: guns, bombs, nuclear and biological weapons. For example, at the height of the Cold War there were 60,000 nuclear warheads, today they are 17,000. 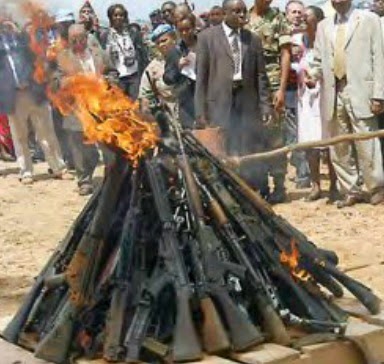 On page 17 is a picture titled: 'Weapons being burnt during the official launch of the "Disarmament, Demobilization, Rehabilitation and Reintegration" process in Burundi." Burundi is a land-locked republic in Southeast Africa.

This photo reminds me of my ancestors, the Spirit Wrestlers / Doukhobors, who on midnight of June 28-29, 1895 burnt their guns in Tsarist Russia in regions of the Southern Caucasus. 7000 participated in this first international recognized mass protest against militarism and wars.
Posted by Koozma J. Tarasoff at 06:02 4 comments:

Anti-War Rally in Ottawa about ISIS

How should Canada deal with the new Islamic State (ISIS)?
Our government is about to make a decision. Here's what my co-peacemakers are doing now.

Yesterday, 6 October 2014, while our government was holding hearings about going to war again, about 40 anti-war protestors were summoned to Parliament Hill. The Raging Grannies notified me by e-mail, so I went to participate. See 20 photos posted online.

The protestors were from both peace and environment groups — Project Plowshares, Nowar Paix, Hands off Syria & Iraq, Rojava YPG-YPJ (Kurds), a housing co-op, etc. I recognized about half of the people, but many faces were new to me. One fellow did not know about the Ottawa Peace Festival which just finished.

When I got home, I found that others sent e-mails of protest. Most are reacting spontaneously as independent individuals and clusters of peacemakers.
Two days ago Peggy Mason, President of Rideau Institute and former Canadian Disarmament Ambassador, wrote:
Yesterday I got an article from Paul Maillet, retired Canadian Air Force Colonel, founder of the Center for Ethics, an Accredited Peace Professional, and Co-Chair of the Ottawa Chapter of the Canadian Peace Initiative. Early this morning he posted 2 articles on his blog, Awakening the Peacemaker Within:
Today Tomas Mulcair, leader of the official Opposition in Canada's Parliament, sent this:

Tonight, Parliament will vote on Stephen Harper's desire to send Canadian soldiers to war in Iraq. However, there is no reason to believe that six months of bombing will succeed where more than ten years of occupation by the US military failed.

Watch my speech on Youtube.com to hear more about why the NDP cannot financially support this combat mission. And, help to spread my message by:
Mr. Harper has failed to answer the most basic questions on why Canada is signing-on to this war, such as:
Canada needs effective leadership. New Democrats think that we should be using every diplomatic, humanitarian and financial resource to respond to the human tragedy unfolding on the ground, and helping to strengthen the political institutions and security capabilities that Iraq and Syria need to achieve lasting peace.

Canada rushing to war is not the answer.
Today I got an update from Paul Maillet:


I have been blitzing MPs and the PM with emails yesterday and today. I  visited 4 of them including Dewar. I  have been on Global TV, CTV Powerplay, and featured in CBC.

Do something say something feel something.  I have said about all I can. ... and all is now dumped on my blog site: PaulMailletPeacemaker.wordpress.com/

Feel free to link to your blog sites if you wish, or use whatever you wish.