Book review: I Don't Do Poetry 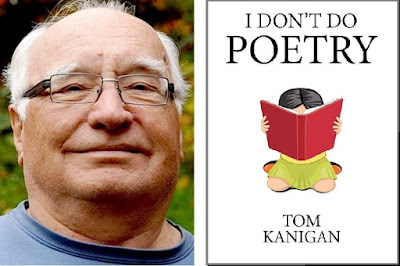 Tom admits that while he was a good non-fiction writer, he never believed that he had any creative talent. At age 62, Tom began writing poetry in 2007. The entire book is online as a promotion.
Tom, a graduate of political science and public administration, worked in Ottawa for over 33 years in the Canadian Public Service primarily in Human Resources Management. He resides in Ottawa and winters with his wife Rose in Florida. He says that he regularly shares his poems with creative writing groups in both Florida and Canada, as well as with online writers groups. Tom is also working on a book regarding his family heritage.

Tom Kanigan's poetry is open verse, no punctuation, no structured rhyme. The widely varied 42 poems are clustered into 5 categories in the table of contents: Childhood Memories, Family and Friends, Relationships, Personal Struggles and Growth, and Social and Political commentary.

This is an easy-to-read no nonsense book about love, forgiveness, compassion, of growing up. It is about telling the truth and being genuine with one oneself, with family and the wider community. It is an unfinished journey of self-discovery, always trying to connect the head to the heart.

Tom tries hard to make amends with his alcoholic Dad whom he had a difficult relationship with him while he was still alive. He also critically looks at his roots in a small community, but with time and distance he comes to terms with them. Here is an example of the author's rediscovery of his Doukhobor Roots (2013):


Grandma taught me Life lessons
I cherish still
Toil and Peaceful Life
Loving Thy Neighbour as Thyself
Simple Fun
True Generosity
The Spirit of God
In us all. [Page 36]


For Tolstoy
As for the Doukhobors
Love is central to human relations
The creation of a society based on
Goodness Equality and Justice for all.
....
I want to know more
About this Fabulous Man [Page 25]

On the 'Politics of Fear' (2008), Tom Kanigan questions the billions spent on the war on terror. He sees the need for politicians to put an end to war and courageously lead the way with a real human agenda for the common good:

Posted by Koozma J. Tarasoff at 13:13 No comments:

After almost 10 years in office, Prime Minister Stephen Harper and his Conservative government have become a political liability for many Canadian citizens at the time when the country is facing a federal election on October 19th, 2015. This dissatisfaction was highlighted with 100s of people participating in two high profile events here in Ottawa to influence votes:

I attended both events, heard the sounds of deep dissatisfaction and photographed the discord. See my 36 photos of Cross-Canada Harperman Sing-Along, and  134 photos of the Memorial March for the Victims of Harperism. See links to multimedia coverage by 7 other journalists, 1000+ photos.

It now seems that the Harper Government has managed to alienate many of its citizens with a series of scandals, paranoid behaviours and secrecy, using fear as a controlling mechanism in governing, and public embarrassment in the lack of diplomacy on the world stage — with 'no credibility with essential players'.

The list of missteps by the Conservative Government in Canada goes on. It is time for a change. Good government is urgently needed to meet the many human needs of our citizens and to bring civility and real democracy to the country.

On October 19th Canadians have an opportunity to go to the polls. ‘Vote for honest politicians’ advises Paul Maillet of the Center for Ethics —Peace Services. Yes, stand up and be counted! Let us reclaim our country as one that is respected around the world for its honesty, good governance, universal health care, clean environment and a supporter of nonkilling peace.

Posted by Koozma J. Tarasoff at 14:54 No comments: