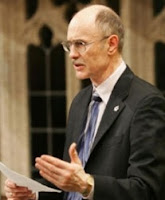 On June 21, Member of Parliament Alex Atamanenko (BC Southern Interior) introduced two peace motions in the Canadian House of Commons to establish:
His plan is to work closely with the Canadian Department of Peace Initiative (CDPI) and other advocates for peace, including the Doukhobors. The motions were Tabled to resume next session.


The essence of Doukhobors is their Spirit Within (love, God, beauty, et al) and this centrally leads them to be part of the nonkilling paradigm. The 1895 Burning of Guns was part of it, as is today their peace activism in society. To me, this activism is the purist expression of Doukhobor behaviour.

The first Doukhobors to lobby for the Deptarment of Peace, that I am aware of, were Mitch Ozeroff of Langham and others from Saskatchewan. I have been doing as much as possible as a historian and journalist to document efforts by Doukhboors to promote world peace.

What is the bigger picture about this? Here is how I see it from a macro-Tolstoyan perspective in order of importance:

Mennonite Central Commitee
Our co-pacifists have been tracking this legislation on the Internet as a Motions log '.. of developments in the Parliament of Canada that directly relate to MCC's priorities, approaches, and values.'

Doukhobors in Georgia, a Russian video

The video begins at 5 a.m., showing a typical Doukhobor prayer service at dawn, contrasted with village street scenes. Interviews summarize that only Doukhobors lived here before, now few remain. They are in contact with the neighboring Doukhobor villages. The second half, at minute 8:30, begins as a nostalgic slideshow of older images and songs of the Gorelovka area showng more people and the cemetery service. The video concludes at minute 15:45 with interviews about their future and images of Dmanisi village at 7 p.m. If you can read Georgian, please send in a translation of the video credits, or post in "Comments" below.

More about Doukhobors in Georgia.
Posted by Koozma J. Tarasoff at 13:54 No comments:

Note: This message is being sent simultaneously to the Canadian Doukhobor communities in Verigin and Saskatoon, Saskatchewan; Cowley, Alberta; and Castlegar, British Columbia, where at the end of June the annual Doukhobor Peace Days will be celebrated. Formerly known as Peters Day or Petrov Dien, the event commemorates the 1895 Arms Burning by Russian Doukhobors in three scattered communities of Transcaucasia, Russia on the night of June 28-29, 1895 (July 11-12, 1895 New Style).

The 116th anniversary commemorating the June 29th, 1895 Arms Burning of the Doukhobors on the steppes of Caucasian Russia deserves to be remembered as an important event in human history. Our ancestors argued that because we humans have the spark of love in each of us, it is wrong to kill another human being. Their vision, popularized and articulated by Lev N. Tolstoy, was to create a compassionate world without wars.

Today that vision is more important than ever. Almost $2 trillion is being spent yearly worldwide on the military resulting in millions of deaths and injuries in Afghanistan, Iraq, Libya, and other places around the world. Humanity is being broken on the excuse of fear coming from the 'enemy' in general and 'terrorism' in particular. This makes the military industrial complex the single most dangerous threat to our civilization.

As Spirit Wrestlers, we ought to stand up and proclaim that the most important human right today is the right not to kill or be killed. That should be our message of the day. Our path is one of love for all brothers and sisters on planet earth.

Let's persuade our politicians to reduce military spending to a trickle and use the public resources to fund human needs. Let's remember that human survival cuts across political, religious and economic boundaries. We cannot remain silent, nor can we remain neutral. On this Annual Peace Day, let us recognize that it is time for a change. Let us speak loud and clear for universal nonkilling peace! 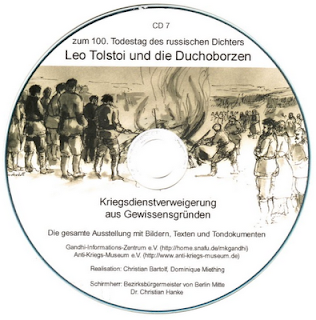 In addition, we are preparing a CD of the English version of the 2008 exhibition Leo Nikolajevic Tolstoy: "I Cannot Be Silent!" — Reflections against Violence and War (2008). (Leo Nikolajevic Tolstoi: 'Ich kann nicht schweigen!') There has been a German language CD of the 2008 exhibition in print since 2008. In it you will find original voice of Leo Tolstoy in digitally cleansed audio files with proper transcripts (English, French and German languages) for the first time.
Our bilingual exhibition was very well received, and I plan to create an English version only for education so that the exhibition can be shown on different places outside Central Europe.
Our 2 Tolstoy exhibits:

On 2010 November 20, 2010, we commemorated the centennial anniversary of Tolstoy's at the Peace Gallery, Berlin Anti-War Museum, with the screening of two documentary films on Tolstoy.

We are a non-governmental organization (NGO) and educational society available to anyone for the promotion of world peace and brotherhood. See our precious second website — Manifesto against conscription and the military system — in the spirit of Leo Tolstoy.


Gandhi Information Center
Research and Education for Nonviolence
Tolstoy and Doukhobors: A list of many online references.
Posted by Koozma J. Tarasoff at 14:30 No comments:

Fred Makortoff, South Slocan BC, sent this 23 May 2011 news item about the Doukhobor region in Georgia :

To ensure political stability and that there is no opportunity for Russia or others to manipulate local politics, Georgia needs to improve integration of its mostly Armenian-populated Javakheti region.

Georgia: The Javakheti Region’s Integration Challenges, the latest briefing from the International Crisis Group, analyses how since the height of tension in the small but sensitive area in 2006, Tbilisi has had some success in addressing grievances by applying a more constructive approach, helping to reduce Armenian and Russian nationalists’ ability to encourage extremism. Although Tbilisi has significantly invested in infrastructure and acquiesced to the use of the Armenian language in schools and public administration, however, Javakheti still faces serious problems.  ... (more)

The full PDF report (Appendix B, page 16) displays an "Ethnic Map of Samtskhe-Javakheti" by the European Centre for Minority Issues (ECMI). This map shows the relative Russian population in the 3 remaining Doukhobor villages — Spassovka, Orlovka, Gorelovka — averaged about half of the total in 2002. Most of the region is Armenian. The Doukhobor portion of that map is enlarged here. 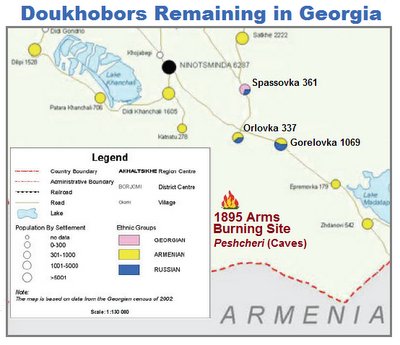 The most detailed report by EMCI of Doukhobors in Georgia was published in 2006, in English and Russian, with a color map: Russian Dukhobor Settlements in Georgia.

Moe about Doukhobors in Georgia.
Posted by Koozma J. Tarasoff at 03:48 2 comments:

The exhibition/meeting "Doukhobors in Georgia" (დუხობორები საქართველოში) will be held at the Conference Hall of the National Parliamentary Library of Georgia (Building III, 7 Gudiashvili Street, Tbilisi 0107, Georgia) on 3 June 2011 at 16:00 (4 PM), to mark the 170th anniversary of the exile of Doukhobors to Georgia.

Alla Bezhentseva, the author of the book Strana Doukhoboriya and the chairperson of the Union of Russian Women of Georgia Yaroslavna will deliver a speech on the Doukhobors’ life in Georgia, their traditions and culture, the present and the future of the school financed by Leo Tolstoy.

Gorelovka, a documentary by Alexander Kviria will be shown at the Conference.

The exhibition will display 20 archival photographs illustrating the Doukhobors’ life in Georgia.

The event is organized by the National Parliamentary Library of Georgia, the Office of the State Minister of Georgia on Reintegration Issues and the Union of Russian Women of Georgia Yaroslavna.

More about Doukhobors in Georgia.
Posted by Koozma J. Tarasoff at 02:13 No comments: