Forcibly taking children from parents is a traumatizing experience whether this be for Native children or that of the Sons of Freedom in the Kootenays of British Columbia. I fully sympathize for the fate of these children.

An article 'Doukhobors want apology from B.C. government,' by Kalyeena Makortoff, published this week in newspapers across Canada, deserves comment.

First the Globe and Mail shows a photo of John J. Verigin as if he was leader of the Sons of Freedom. He was not. Compare to the excellent photo in the Toronto Star below by Peter Savinkoff which really tells a story in one image. 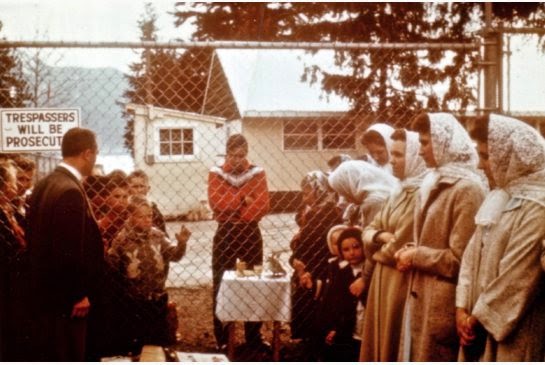 Second, the story dealt with the 170 survivors of the New Denver School and Dormitory for zealot children, British Columbia, who went through various forms of trauma from 1953 to 1959. In early February of this year, a group calling itself the New Denver Survivors Collective argued before the British Columbia Human Rights Tribunal that the government has unjustly refused to apologize to the zealot parents. They also pointed out to the hefty compensation packages doled out to other groups who faced abuse at BC-run residential schools as unfair.

Ultimately, the group wants the government to carry out recommendations put forward by a 1999 B.C. Ombudsman report, which called for an unconditional, clear and public apology. The human-rights-tribunal ruling is expected late this summer.

In the 1950s, the zealot parents were given the choice of home schooling using local Doukhobor teachers. However, they chose not to because they were against formal education as well as against governments collecting basic statistics on births, marriages and deaths.

In reaction, the BC Government of the day headed by Premier W.A.C. Bennett, took 'a get-tough' policy of forcibly teaching the children at a special location in New Denver, BC at the site where Japanese Canadians were earlier interned during World War II.  Periodic raids by RCMP on truant children became a routine occurrence as zealots soon developed atrocity stories and new myths. The experiment in re-charting children (which went against the recommendations of the Hawthorn Committee) was termed 'a disastrous failure'.


'....These were innocent children, victims of their own parents' misguided belief system. The blame, therefore, lies solely with these fanatical parents who made incredibly bad choices, and did not act in the best interests of their children. They used their children as pawns in their fanaticism and rebellion against the government. When the parents of these children and what is left of the Sons of Freedom community apologize to their own children first, and then apologize to me and others in my Doukhobor community who, as children, were traumatized by their terrorist activities, then and only then should the government proceed with apologies on its part if it deems it fitting.'

Another comment comes from Annie Barnes of Alberta, who wrote a letter to the editor of The Province, but it was not published. Annie is a former hospital equipment planner and author. Here is her letter:

Orthodox villages were set aflame while these children slept. Their parents were constantly vigilant, on guard, fearful their home could be next.

Independent Doukhobor children and young adults were all tainted in the media by the actions and demonstrations of the Sons of Freedom sect, often stopped and searched during roadblocks because our names ended in Off. In the fifties and sixties, even the seventies, we were sometimes denied our rightful place in society or the community or the university because of the actions and demonstrations of this sect.

Early non-Doukhobor immigrants were often denied many privileges given to others born in Canada. Should everyone ask for an apology, or should we, as pacifist Doukhobors forgive ourselves and others as we were taught to do by our forefathers?

Yours very truly,
Annie B. Barnes

The question of forgiveness and compensation should be critically looked at before any public apology and compensation are considered. This is not to downplay the innocent. The trauma for many of the children (now adults) was no doubt monumental. Their parents ought to take at least some responsibility for that choice. However, the broader victims — the wider Doukhobor community—deserve an apology (and possibly compensation) as well. It would be fundamentally unjust for government to single out the extremists in helping them to rewrite and hijack the wider Doukhobor history. To do so would be a frontal attack on the integrity of the whole Doukhobor Movement.