A Window On Our Doukhobor Soul — Part 2

Artist İsmet Koyuncu has drawn another version of A Window On Our Doukhobor Soul. The first version, a pastel color, was presented here 3 weeks ago asking for comments. This next version (below) sent today is in pencil, not color. 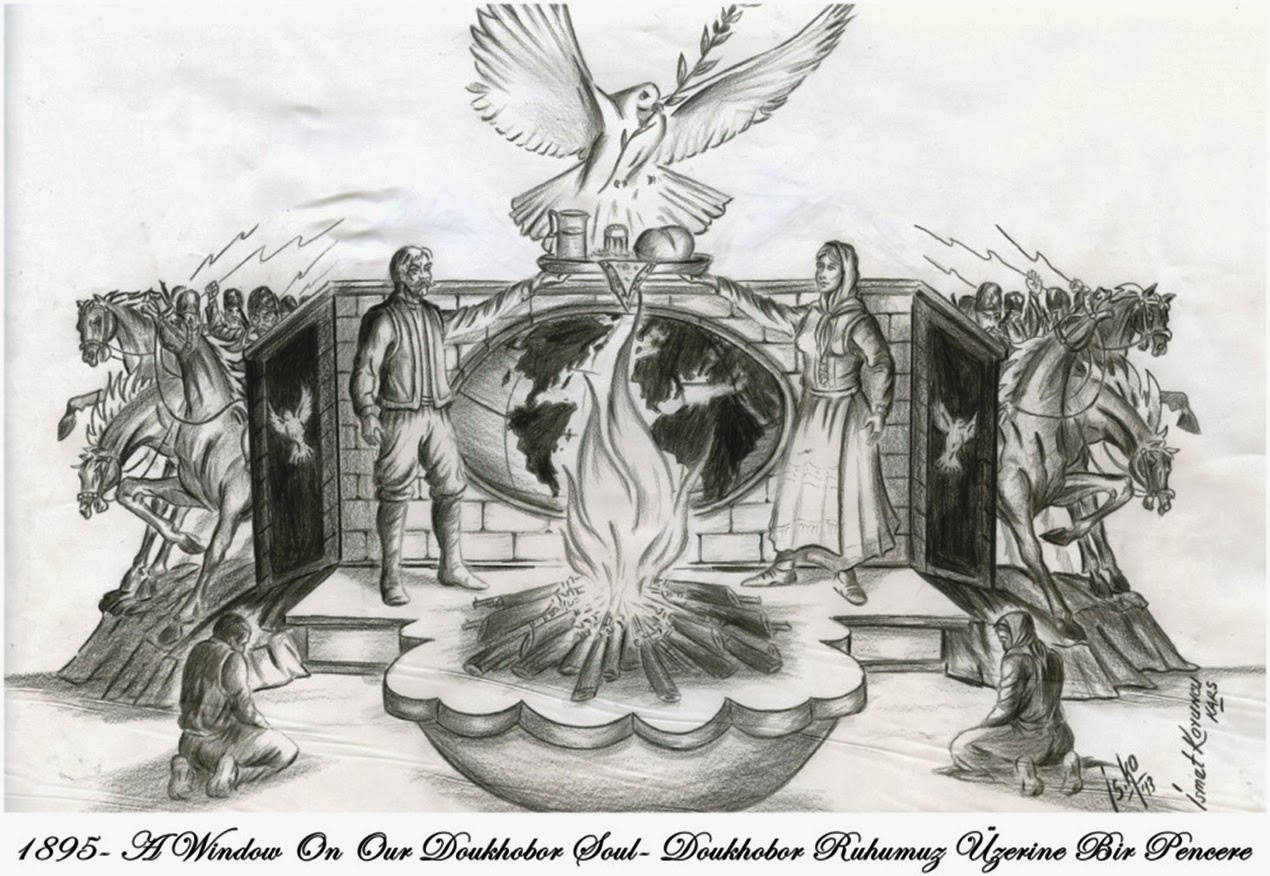 Vedat is using these images in his Doukhobor documentary film which he would like to present at the USCC May Festival in 2014 if possible. Airfare on Air Canada Vancouver-Ankara is less than $1000 in April.

Again Vedat asks for comments from readers. Write your comment below.

Koozma and I prefer the first version panorama which provides the correct emotion of the day, and the spilled salt and cut bread were interesting artistic statements.
———
More news from Turkey about Doukhobors.

Posted by Andrei Conovaloff at 11:07 No comments:

4 For Coffee: a meeting of 4 gods-within us

I could have titled this log an informal gathering, or a meeting of souls, or kindred souls, or walking for peace, or revealing our inner and outer journey to build a war-less world. But this title best summarizes what I learned.

On Tuseday morning, December 10, I met with three friends at a downtown Ottawa cafe for coffee, to trade books and talk. It was International Human Rights Day and the memorial for Nelson Mandela — a fitting time to meet with three people whom I consider to be co-seekers of inner and outer peace.

We are pilgrims with our own histories, dealing with the stark reality of the day, not of this world. We are working towards a common ground approach to a new vision of human development. We each shared the god-within us, which is a concept common to each of our different ancestral cultures from around the world, and even goes way back to ancient Greek times. This day we became much more aware that the god-within each of us was the same.

They are Bill Bhaneja, a retired political scientist, Ottawa, playwright and author of Quest for Gandhi — A Nonkilling Journey (2010), and Troubled Pilgrimage: Passage to Pakistan (2013); and Mony Dojeiji and Alberto Agraso, co-authors of Walking for Peace — an inner journey (2013), and I Am Happy (2013).


Bill and I have known each other since 2006 while planning the Annual Ottawa Peace Festival, which Bill has since dubbed as ‘the longest peace festival in the world’. Also that year, we both attended the First Global Leadership Forum in Nonkilling in Hawaii where I presented a paper on Lev N. Tolstoy and the Doukhobors and their place in the nonkilling leadership paradigm.

Bill's Hindu background gave him a chance to reflect on the impact of Mahatma Gandhi who had chosen to follow the nonviolent path for social justice and nonkilling peace. From his Vedantic spiritual tradition, Bill was able to grasp the notion that 'we are all Gods' and that through sharing our common humanity, there is another path that will bring about a more peaceful and wholesome society on planet earth. His visit to the subcontinent described in his recent book became a pilgrimage to some of the places where Gandhi stayed during the struggle for India's Independence from the British Rule. Bill's wife comes from the Republic of Ireland, which also struggled in turbulence and change.

I met Mony and Alberto at their table display in Ottawa City Hall during Friends for Peace Day. We exchanged books, and met today to trade a few more books. Mony is a young Lebanese lady from Canada with an MBA, and Alberto is a talented artist from Spain.

Their book Walking for Peace documented their 13-month, 5,000-kilometer odyssey across 13 countries to Jerusalem. Most important, they experienced a spiritual journey, finding their true selves. In December 2003, exactly two years after they began walking, a daughter was born. Their journey of peace now continues with her. Their book received a Global eBook Award in 2012 and was a finalist in the 2012 National Indie Excellence Book Awards; and is being considered for a documentary film. This year the Spanish version of I am Happy got 2nd place in the International Latino Book Awards.

During their journey they read Conversations With God, in which the depressed author wrote an angry letter to God asking questions which led him to reconnect  immediately with the divine presence. From the book, Alberto learned to listen carefully, reach out to touch others with his new insights, and began an inner journey of wisdom into himself and the world.

Mony also read Peace Pilgrim, by Mildred Norman who did a 28-year-walk for a meaningful way of life. I told them that in 1957 the Peace Pilgrim stayed at our house in Saskatoon, Saskatchewan, and I heard her message about working to make North America a more peaceful continent. She walked like a pilgrim with only a tooth brush, comb and a map, wearing the same clothes every day (blue pants and blue tunic that held everything she owned). She never used money. I published two articles about her: Peace Pilgrim Gives a Challenge to Doukhobors, in our Doukhobor magazine The Inquirer, July 1957.

Alberto spoke about his experience with shamans who provided him with magical insights into his search for solutions to seemingly unsolvable problems. I shared the same about two elderly Fringe Saulteau Indian medicine men in the Broadview area of Saskatchewan that I met during my research in the 1960s. These men at the age of 90 were real practitioners of healing, finding lost objects, and being trusted as wisdom people for a territory of thousands of kilometers around them. They died sometime after I left the community without sharing their magic with their brothers and sisters. Why? They could not trust most of their tribal members because their 'medicines' were so powerful that they could harm life if not used with care.

I explained that my father's parents came to Canada from Russia in 1899 during the large Russian Doukhobor migration here, while my mother Anastasia arrived 27 years later at the age of 15. She was about to be deported in Quebec City (because she came alone on account of the German couple she travelled with got sick and stayed in Liverpool, England) when a French-Canadian couple travelling beside her said 'she came with us.' The Canadian couple saved the day and Mom continued alone by train to Saskatoon where she met her cousin. She met and married my Dad. My brother John was born in 1928, four years before me.

My Doukhobor (Spirit-Wrestlers) philosophy of love originated on the high steppes of Trans-Caucasia, southern Russia, where on midnight of June 28-29, 1895, 7000 Doukhobors burnt their guns in three locations. My inspiration comes from this first mass world protest against militarism and wars. Lev N. Tolstoy called war 'the slavery of our times' and was in contact with Mennonites, Quakers, Gandhians and the Transcendentalists in the USA, and the arms burning was a sign that the seeds of Jesus Christ were alive and well.

My pacifistic ethic comes from family stories about respecting others as worthy human beings. Though Mom only had three months of schooling, she was learned in the hospitality ethic and knew how to weave rugs, socks, slippers and doilies, make a wonderful garden, as well as to cook delicious meals. From this Slavic heritage I learned about hard work, beauty, nonkilling, creativity and bridge-building across boundaries.

We spoke about the spirit of love that permeates our lives and gives us meaning as individuals and as a human species. The Spirit Within or the Love Within (as used by Doukhobors), or the Light Within (as used by Quakers) all give us optimism to act as Gods within the confines of a friendly planet. Our intention is to act with passion, but equally to be socially responsible for our actions.

We all seemed to be on the same page when we saw the need to focus on the meaning of life. As photos tell a thousand words, actions are central to our adventure in what we mean by love and understanding. The 'win-win scenario' is required in our search for truth and goodness. We are in this together in the long run.

No one has a monopoly on truth. Keeping ourselves segregated into a sect, a tribe, or a race is too narrow. It took 27 years for Nelson Mandela in prison to eventually transform the narrow thinking of the apartheid regime, resulting in the release of this brave patient man from prison and his eventual win as the first Black president of South Africa in 1994.

It is a tribute to Nelson Mandela that he sought to reconcile the differences between races in his country and to eventually come to the conclusion that there are better alternatives to fear and violence. Love and reconciliation is the dual highway for today and the future. That seems to be the visionary path that the four of us have come to in our respective journeys.

The Power of One is a reminder that we can make a difference in our lives and that of our society. At the same time, 'our relationship to others' gives reality to us as equal social beings. We are part of a larger whole. Because of this connection, we need to learn to live with one another as friends. Here the nonkilling philosophy comes fully into play with the measurable goal of a killing-free world by means open to human creativity in reverence for life. A Department of Peace at the cabinet level would be one of the practical ways to move countries in the direction of a world culture of peace.

We need to allow the freedom of each to 'walk our talk' in our own style, and continue to support the cooperative path in which 'we all win'. The survival of our civilization depends on creating a balance between the 'I' and the 'We'.

Bravo to the Hundred Monkey effect in which a new behaviour or idea is claimed to spread rapidly by unexplained, even supernatural, means from one group to all related groups once a critical number of members of one group exhibit the new behaviour or acknowledge the new idea.

December 10th, 2013 was indeed a remarkable day for me! I was glad to celebrate it with dear friends and I am sharing it with each of you. Peace to the God-within you!

See all my meeting reports.
Posted by Koozma J. Tarasoff at 09:40 4 comments: