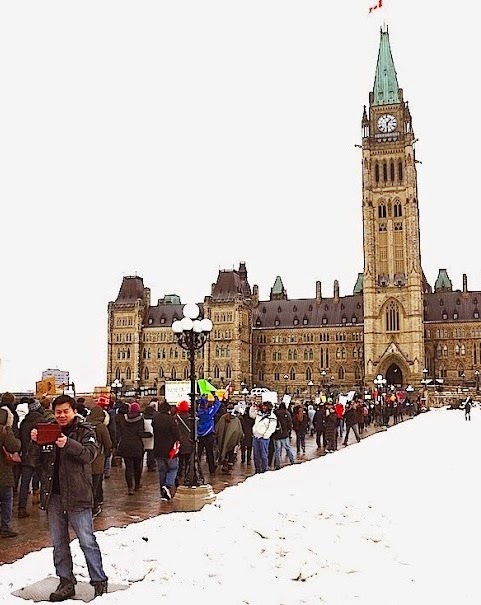 In freezing drizzle, hundreds gathered at noon in front of Prime Minister Stephen Harper’s offices, chanted and staged speakers, then walked to the "Peace Tower" on Parliament Hill where they peacefully, but loudly proclaimed their defence of freedom, to reject fear and stop Harper’s Secret Police Bill.

This Ottawa Day of Action Against Bill C-51, organized by #StopC51, was one of 73 held across Canada. 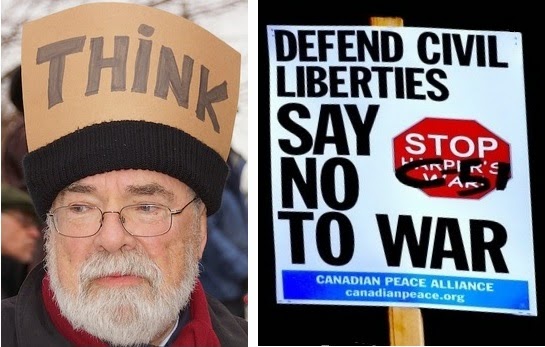 The proposed legislation is in the form of an Omnibus Bill which the Conservative government is rushing to push through without any amendments, so as to bolster its own support of this year’s federal election.

If passed, the Bill would give full access (without our knowledge or consent) to 17 federal departments and agencies about personal data of its citizens, publicly designed to identify and suppress security threats. These agencies include the RCMP and Canada’s two spy agencies, the Canadian Security Intelligence Service (CSIS) and Communications Security Establishment (CSE). But also it includes the Canada Revenue Agency, the departments of Citizenship and Immigration, Health and Transport.

Privacy Commissioner of Canada Daniel Therrien has broader concerns about information sharing in the proposed legislation.


… Another bill, C-44, which is aimed at empowering CSIS, raises “fundamental questions for privacy,” he said, as well as U.S. whistle-blower Edward Snowden’s recent revelations about massive electronic surveillance operations.

“Is that the kind of society we want to live in, where ordinary Canadians, law-abiding individuals, are the subject of intrusive monitoring and profiling by national security agencies?” he asked. (2)


This dangerous piece of legislation opens the door to undermining the rule of law, human rights and democracy itself. It would be the first step in CSIS being turned into full secret police. The Bill threatens to stifle discussion on such issues as:
Using the club of fear, the government claims that the state needs extra powers to counter radicalization and ISIS. However, the existing laws, many professionalists believe, are sufficient to deal with this threat in Canada. The real solution lies in prevention. In our foreign policy, we need to work for peace. We need to prevent soldiers from going abroad, being killed, injured and being affected by Post Traumatic Stress Disorder.

In other words, the Prime Minister and the state ought to stop militarizing Canada and bring its troops home. Using those billions of dollars saved, Canadians can then deal with climate change and clean environment, income inequality, full free universal public health care and education, culture and sports programs accessible to all, good governance, and serious attention to upgrading public infrastructure across the country.

Walking Across Canada for Peace

Beginning May 1st, 2015, he will carry a DPI flag on a 5-foot pole and petitions to gather signatures across Canada. He intends to arrive in Ottawa in time for the launch of the 9th Annual Ottawa Peace Festival on September 21st, 2015.

His project is outlined on his website: Peace Walk for the Department of Peace Initiative. His preferred path is the Trans-Canada Highway, but the exact route will be made known later.

The Ottawa DPI Chapter will support his walk and will encourage people to wait for him at Victoria Island and walk together to Parliament Hill.

I spoke to Forrest and colleague Sandra Moon Dancer on March 10th during a 4-hour coffee meeting with other supporters and an evening meeting of the DPI Ottawa Chapter.

During our conversation, I realized that we first met in in the mid-1990s in British Columbia when he visited the Doukhobors in Brilliant, nearby Japanese internment camps and Vietnam war resisters.

Jesse-Blue Forrest is a remarkable charismatic personality with an optimistic outlook on life and an abundance of confidence. He was born in 1948 to a Cherokee mother and a Celtic father in the USA. At the age of five, he and his twin sister were separated and sent to residential schools. Eventually he was raised by his Native grandparents. Because his best friend was Black, the Ku Klux Klan burned a cross in front of his home and burnt his friend’s barn.

At age 18 he clashed with the American military Draft which led him to choose a 50-year career for peace. In walking to abolish the Draft, Forrest was jailed for 18 months in solitary confinement. He read Lev N. Tolstoy’s The Kingdom of God is Within You, which influenced Mahatma Gandhi. Now living in Canada, he has spent 26 years and countless dollars in legal fees to clear his name and regain the right to return to the United States.

Later in 2013 (August 31-September 8) and in the summer of 2014 (July 25 - August 10), they were invited to Iceland to build medicine wheels, and hold ceremonies with the Four Winds International Peace Pipe, including a ceremony at Yoko Ono’s Imagine Peace Tower. They travelled around the island with a group of Canadians, connecting Canadians and Icelanders in ceremonies for Peace.

‘I am not against the government.’ Forrest told me, ‘but I choose to work cooperatively to change and improve society.’ Positive affirmation for cooperative peace, for him, is a powerful strategy to win friends and influence people. It’s all a matter of nonviolent intent and choice to start a national conversation about the role of DPI in creating a culture of peace in Canada.

With his visionary work for peace, a concrete design (the DPI), and the courage to get things done, Jesse-Blue Forrest presents an awesome opportunity for Canadians to reclaim their country as peacemakers. As he walks across the country, talking to people and planting 'peace trees', please join him in support of the Department of Peace Initiative. Your actions may save not only you, but your children, grandchildren, and many generations to come.

Donate to the FundRazr for Peace Walk for the Department of Peace Initiative, by Nathan Jesse-Blue Forrest. All donations will support various elements of the Walk, including: equipment, accommodations, Peace flag, flight to B.C., food and water, and other living expenses. 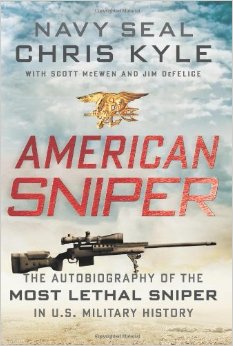