A total of about 266 books about Doukhobors of the highest quality are for sale in Vancouver, B.C. as a lot. You may never see a Doukhobor book collection like this again. 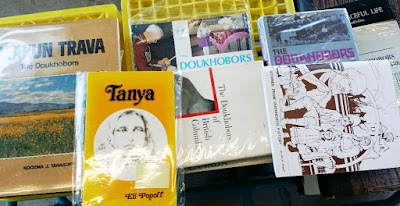 For 24 years I have built it under the guidance of the B.C. Doukhobor community including the Russian program at the Castlegar school. 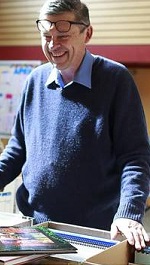 In my travels to sell books to the schools in the Kootenay region of B.C. I have met many Doukhobor people and I came to deeply admire their ideological commitments.

These items are for sale for the regular market price which is over $100 for some books. As a collection it is clearly worth much more, but if an institution or university or individual wants to buy the entire collection (with multiple copies of each book) the price of each item will remain the same.

Buying the collection or even just one copy of each will save a huge amount of acquisitions time and the huge payroll costs of purchasing each title individually.

The government now has the funds for support now of our wonderful Canadian Doukhobor culture and history. But you will need to hire the right grant writer.

I do not have the time to make or provide a list of these books. I want the buyer to visit and see the great quality of this collection.

The collection can be viewed at 1818 Quebec street (near Main St.), Vancouver, B.C.

News
Koozma adds
For other sources of Doukhobor and Slavic books
Posted by Andrei Conovaloff at 06:53 No comments:

Are there two Streams of Doukhobors?
Apostolic and Inclusivist? 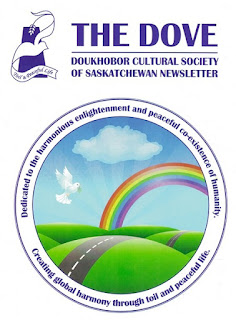 Bill Kanigan of Saskatoon, Saskatchewan, and his son Kim Kanigan, Queensland, Australia, posted a paper in The Dove April 2017, pages 5-15, 'The Two Streams of Doukhobor Faith'.

Generally, the 'Apostolic Doukhobors' are grounded in a central belief in Jesus Christ including the Christian belief in arising and being born again, in erasing sins, in the existence of god, and a belief in the creationist myth.

'Inclusivist Doukhobors' reject much or most of organized churchism whether this is the bible, its rituals, and its mythology, and instead base most of their beliefs on the universal truths of love and god within.

Does this categorization help the process of understanding Spirit Wrestlers / Doukhobors?

The proposed dichotomy of 'two streams' of Doukhobors is too simplistic and encourages splintering. We are much more complex and diverse, as Doukhobors testified in Chapters 13-14, Traditional Doukhobor Folkways, 1977 (Revised 2017).

Though I support the effort to understand Doukhobor heritage (and Bill's and Kim's work is most welcomed and should continue), their dual categorization fails to recognize the real Doukhobor genius as a social movement in human development. I believe that describing Doukhobors in terms of these two streams leads to fake news and divisions which discourage understanding of what Doukhobors really stand for.

The best description of contemporary Doukhobors (in my assessment) are those who have long dropped their chains of churchism in favour of a new paradigm of morality based on love and compassion for life. They tend to be ahead of the curve of human progress by rejecting the mythology of organized religions. Their nonkilling ethic is a call for nonviolence and a world without wars.

Readers should know that Bill's wife is Roman Catholic, which provides him with the opportunity to better understand the Orthodox and Protestant faiths.  Also know that my wife, Kristina, is Orthodox, which has not changed my Doukhobor beliefs from before we got married.

More by K.J. Tarasoff
Update: February 8, 2018
See all Questions and Answers.
Posted by Koozma J. Tarasoff at 09:53 No comments: