Bill Kalmakoff (91), Saskatoon, Saskatchewan
'For more than two decades, Bill Kalmakoff has served as a community representative at province-wide culture meetings of the Saskatoon Doukhobor Society and the Doukhobor Cultural Society of Saskatchewan. He has promoted public awareness of and fostered a greater appreciation for the contributions of Canadian Doukhobors.' 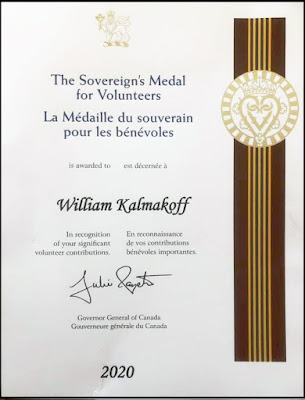 Bill has served as Elder for the Doukhobor Society of Saskatoon (DSS), in 2018-19, and 2014-15.
In 2012, Bill was interviewed for Doukhobor bread making.
'Doukhobor tradition carries on one loaf at a time', The StarPhoenix, Saskatoon SK, August 12, 2012.
— 60 volunteers bake and sell the 5,000 loaves produced at Saskatoon Exhibition. Interviewed: named: Bill Kalmakoff, John Tarasoff, Peter Holoboff, and Doreen Konkin.
In 2000, Bill was one of 'Eight volunteers to be honoured by Provincial Medal, Government of Saskatchewan.' 'Saskatchewan’s Lieutenant Governor, Lynda Haverstock, today announced the names of eight citizens who will receive the Saskatchewan Volunteer Medal for 1999. The recipients include William Kalmakoff of Saskatoon, a well-known educator and promoter of multiculturalism, has given his time and energy to:
Sources

Posted by Andrei Conovaloff at 14:32