John and I are close in age and have known each other for many years. I was Best Man at his wedding. We worked together building bridges of understanding between the East and the West, and getting to know the stranger.
That ancient wisdom is dearly needed today between the Russian Federation and the West. The welfare of the world depends on this understanding so that we can build trust to mutually work towards a peaceful world. Is anyone listening? As a generous man, John will be missed. Sincere condolences to the wider family.
In 1976 he was mentioned in his ag newsletter:

John Atamanenko '54 is now Manager of The Carpet Warehouse in Saskatoon. He has just built a new store and would be glad to have you drop in. (Saskatchewan Agricultural Graduates Association Newsletter, No 145, December 1976, page 4, col. 2)

In 2002, I included this short biography and photo (above) in my big book: Spirit Wrestlers: Doukhobor Pioneers' Strategies for Living (2002), page 310.

John E. Atamanenko, an agronomist by training, has worked variously as an owner of a carpet store, a bingo hall, and as a farmer. An active proponent of EastWest cultural exchanges, he is best known as founder of the Saskatoon Russian Cultural Club. The Club has promoted the use of Russian language, assisted the Russian Pavilion in town, has shown Russian movies, and has arranged for the visit to Canada of Soviet artists, students, professional and business people. His cousin Alex Atamanenko, in Castlegar, BC, is an international Russian-English interpreter, educator, and karate instructor, while Alex's brother George Atamanenko is an agricultural expert in Vancouver. 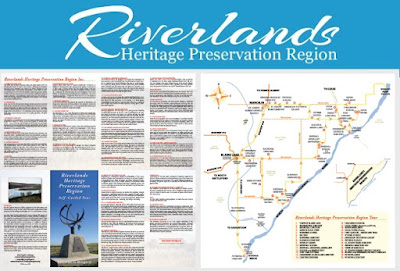 In 2003 John helped launch a project to conserve and promote an area north of Saskatoon near Blaine Lake, where he was raised. They formed the Riverlands Heritage Region project committee, ‘to preserve the historical contributions of Russian peoples who settled on the Canadian prairies over a century ago.’ By 2007 he served as president and treasurer and helped write a progress report about the project: Riverlands Heritage Region Formed in Saskatchewan. In 2015 the tour map (above) was published, titled 'Petrofka to Wingard'. By 2017 the new Riverlands website presented a virtual tour, maps, and video.

More of John’s active biography can be seen in his Obituary in The StarPhoenix, Saskatoon, and at Dignity Memorial Funeral Home.

Plant a tree in his memory.
Posted by Koozma J. Tarasoff at 18:58