Play Review: This is War

This is War is a 90-minute play about the traumatic psychological experiences of 4 Canadian soldiers in 2008 in a volatile region of Afghanistan with little backup support. The play is a case study of Post Traumatic Stress Disorder (PTSD), showing how war harms society. 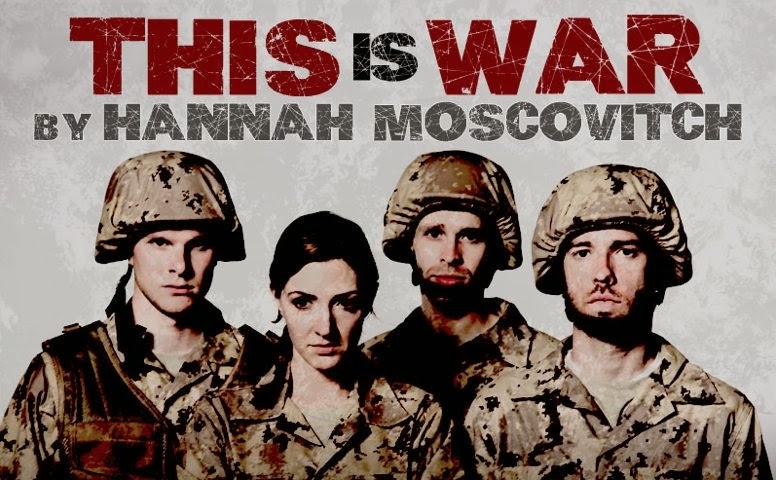 I was invited by members of PeaceQuest to join them and met about 16 fellow pacifists. After the play we met for dinner to get to know each other, but the restaurant was too noisy to talk. I did meet their funder, Sister Pauline, a nun who heads a religious order that donated $25,000 in seed money.

The play had toured in the USA, and is now in Canada. I was impressed with This is War performed at the Great Canadian Theatre Company in Ottawa, Ontario, on February 22nd. The main message of the play was the negative effect of PTSD on the soldiers as a result of their horrible war experiences which the actors describe. Long-term symptoms can include spousal abuse, divorce, suicide, drinking, and drug addiction. War damage is extensive, costly and chronic.

The topic of PTSD has been frequently reported in the newspapers and I have met a doctor who is in our peace group who has PTSD as a result of his service in Afghanistan.

Playwright Hannah Moscovitch peers inside the stories of 4 soldiers (3 men, 1 woman) on the ground. A 5th character is an imaginary journalist (the audience), which each soldier often addressed by facing the audience, often saying “F--k” while reporting what happened to them.

The setting is the Taliban resurgence in the Battle of Panjwayi, 2006-2009. The actors describe horrible actions, such as killing a 5-year-old Afghan child by mistake. “You were told that if you feel harmed or threatened, you shoot first and ask questions later.” Sometimes events are rerun two or three times with small changes in costumes. Often the same event is reported differently by each actor.

The woman, Corporal Tanya Young (played by Sarah Finn), easily but troublesomely succumbs to sexual relations with Sergeant Stephan Hughes (played by John Ng) and with Private Jonny Henderson (played by Drew Moore).The fourth member, Sergeant Chris Anders (played by Brad Long), is a gay medic who strives as best he can to be a healer.

The play does not preach, but simply shows the ugly facts and invites the viewer to be the judge. I say all who fought in wars are innocent pawns of government, and the personal and social costs of war are real.

For me it is obvious that the wider public has not heard the wisdom of moral leaders such as Lev Tolstoy, Mahatma Gandhi and Martin Luther King Jr., who in their times have stated that the price of war is horrendous, it is a crime and it is a slavery of our times. In 1961, the former US President Dwight D. Eisenhower on the last days of his Presidency warned the nation that the military industrial complex is the greatest threat to society.

War teaches us to kill another member of the human family. That disconnect goes against the whole grain of everything that we have been taught in school and in church of being kind to others. Morality goes out the door as soldiers are trained to kill automatically. There is no brotherly or sisterly love to our neighbours. War is we (the ‘good’ people) against them (the ‘inhuman enemy’). Liquor and drugs are often given out to soldiers just before going into battle so as to ensure that 'they will kill’.

In Canada, in 2009, a physician from Saskatchewan, Dr. Dale Dewar, wrote me:

I regard war as an archaic form of interpersonal relationship on a grand scale but much like bullying on the playground or spousal abuse. Just as these activities were once widespread and ignored, so utterly, do I believe that war will be one day regarded as obscene. Its utter waste of human resources — lives, intelligence, time and money — devoted to childish ‘games’ will eventually end — or the human race will end.

If ‘this is war’, then it is long overdue that we as conscientious citizens of this or that country need to work actively together to get rid of war as we have done with human slavery years ago. This means no more glorifying war. It means working for peace….Remember that wars will cease when men and women refuse to fight.