Appeal: No to War. No to NATO

At the brink of a NATO summit in Europe (8–9 July 2016, Warsaw, Poland) there is an urgent Appeal to the international peace movement to oppose this meeting and its sable-rattling rhetoric. Following US President Barack Obama's visit to Canada on June 29th, Canadian Prime Minister Justin Trudeau caved in to Obama's plea to go to the Warsaw meeting in Europe and lead a combat mission in Latvia on Russia's border. That action is threatening world peace and making us become accomplices to the terrorism of war. 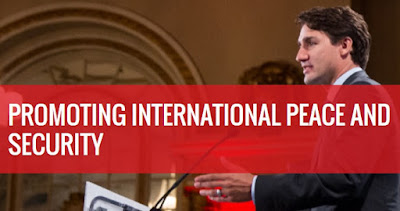 Shame on Prime Minister Trudeau for abandoning his election promises to work for a peaceful world.

The Appeal is one that Canadian peace groups could readily support. We have to act quickly. Contact your Member of Parliament and support the views of sanity for a new world order that is safe for our children and our grandchildren. Stop supporting criminal corporate-neocon-fascists who have a big appetite to make blood money from war.

William J. Perry, former Secretary of Defence in the Clinton administration, says that the danger of some sort of nuclear catastrophe today is greater than it was during the Cold War and most people are blissfully unaware of this danger.'

The detonation of even a single nuclear bomb today could destroy our way of life.


Appeal to the International Peace Movement

In the interest of peace — participate in the protests of the international network “No to War — No to NATO” against NATO’s summit taking place from July 8th until July 10th, 2016, in Warsaw.

We protest for
In the last couple of years we have never been as close to belligerent confrontation in Europe as today. Leading politicians, military officials and scientists of different NATO member states therefore warn about the politics of aggression pursued by NATO.

The Bulletin of Atomic Scientists doomsday clock is at three minutes to midnight. It is time to stand up, it is time to protest: the next major war in Europe will be the last one. Therefore, we call on all of you: come to Warsaw and join the anti-NATO-protests at No-to-NATO.org.

It is time to say NO to war and confrontation and YES to peace, to life, to disarmament, to cooperative security in Europe.


For the international network “No to War — No to NATO”
Kristine Karch, Lucas Wirl (Co-Chairs)

Canada expected to send troops to Latvia to deter Russia. The Globe and Mail, 30 June 2016.