Some of you may remember me from my appearances starting at age 15 in Canora, Saskatchewan, or on radio and TV. Others may remember me living in Maple Ridge, BC, where I owned the Little Cricket Gift Gallery for 14 years.

More recently some of you may have seen me walking on one of the beaches of the Sunshine Coast, BC, searching for my latest inspiration.

Hopefully most of you will remember me as singer~songwriter Ron Kalmakoff. That is where my heart is today.

After 7 years since my last album, Turn Around in 2010, I am back with a new recording project: ‘Long, Long Time’, YouTube.

Send me email or buy my music at Bandcamp. I’d also like to hear from you via Facebook or Instagram.
Ron Kalmakoff is an accomplished recording artist who for a short time used the English stage-name “Ron Sommerfeld” (1974), but returned to his identity as a Doukhobor. His concerts and 1982 demo led to an appearance on the Tommy Hunter TV show, then CBC's Search For the Stars where he placed 45 among 700 performers. His music was played and sold in Europe. Ron now lives in Sunshine Coast, BC. His original website RonKalmakoff.com was online from 2011 to 2015. Songs and videos online:
Ron Kalmakoff remembers his Canora roots, Kamsack Times, April 25, 2019, pages 6,11.
Posted by Koozma J. Tarasoff at 19:01 No comments:

The forthcoming peace conference in Toronto, Canada in September 2018 appears like the ultimate in world peace conferences. Its organizer is David Swanson, founder and Director of World BEYOND War. 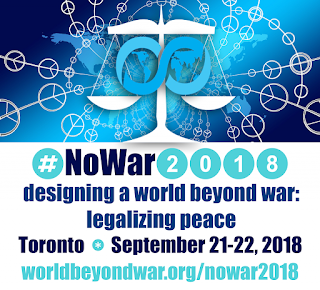 The conference shows much promise, and these additions would make it more effective.

The Doukhobors should be included under 'War Abolishers' (right column). In 1895, 7,000 Russian pacifists in Russia burned their guns — a public declaration to the world that violence and wars are wrong and that non killing is the way of the future. As a Doukhobor, I have been taught that it is wrong to kill another human being because there is a spark of god/love/beauty in each of us, and war is a crime.

At least three speakers from important organizations should be included in the Speaker's List:
World BEYOND War is a global network of volunteers, activists, and allied organizations advocating for the abolition of the very institution of war. Its success is described as being driven by a people-powered movement. Support their work for a culture of peace. World BEYOND War PO Box 1484 Charlottesville, VA 22902 USA
Posted by Koozma J. Tarasoff at 07:32 No comments:

Lehman wrote: 'The Billboard was done in memory of Peter E. Gehl, a past president of the Regina Peace Council, a national board member of the Canadian Peace Congress, and a co-founder of PeaceQuest Regina. Peter was a life-long worker for peace and social justice.'

When Ed Lehman was asked by phone (June 6) "Why a billboard?", he explained: "To do something different. To get our message to more people. ... To do it more broadly. ... We are normally talking to small groups of people, when when we need to be talking to tens of thousands of people. ... That highway has lots of traffic."

When asked how they chose the message, Lehman said that they deliberated to be as brief as possible, to only post what was important and could be read by a passing vehicle. He added that it was expensive for them, so they paid for only one side, seen by west-bound traffic, for one year from May 25, 2018. They hope to get more exposure during the unveiling on June 16.

To get more press coverage, the Regina Peace Council will host an unveiling ceremony next week, on June 16, 2018, at 2 p.m. on the east side of the billboard. Invite yourself and your friends.

Peace Billboard Celebrated in Saskatchewan, by Ed Lehman, Peace Quest, June 19, 2018 — The peace dove (1961) art was one of several by Pablo Picasso, who was a 1950s promotor of the World Peace Council.

Please add any updates or posting about this billboard.
Posted by Andrei Conovaloff at 14:30 No comments: