In April 2010, Vancouver authors Rifet Bahtijaragic (right) and Bill Hoopes published a book about Doukhobors : Chernovs In the Storm of Time, which I reviewed in August 2010.

A year later the book was republished under a new title, Chernovs' Toil and Peace, and honoured as finalist for the 2011 Ethel Wilson Fiction Prize by the British Columbia Book Prize Committee. Below is their award certificate.


In a tribute to the authors, Dr. Glenn D. Paige, founder and President of the Center for Global Nonkilling wrote: 'What a surprise and inspiration to receive your novel Chernovs' Toil and Peace ... You are a pioneer in the nonkilling arts of the 21st century .... A combination of artistic genius of early Tolstoy informed by the spiritual genius of the later Tolstoy could do it. Your work is a harbinger....' 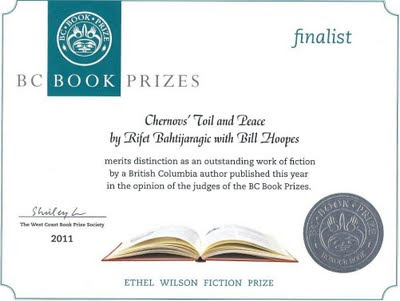 Posted by Koozma J. Tarasoff at 11:04 No comments:

Ataturk University, Erzurum, Turkey — Spiritual Christians from Russia (Dukhobortsy, Molokane, Pryguny, Subbotniki, Dukh-i-zhizniki, etc) are being researched by university professors and students in Turkey. A conference was held in March 2011 to review findings and proposals. Erzurum is 115 miles (189 km) west of Kars city.

———
More news from Turkey about Doukhobors.

Could you please send us an Easter message for our sobranie gathering on Sunday, April 24, 2011?

My sincere greetings to all of you gathered here in celebrating this ‘Velik Dien’ 2011 known in the West as Easter.

From our Doukhobor history in Russia we know that on Easter Day 1895, Matvey Lebedev and 11 other Doukhobors threw down their guns while training in the Elizavetpol reserve battalion, stating that war and Christianity are incompatible. The result was that the dissidents were arrested and sent first to a disciplinary battalion before being exiled.

That brave action eventually led that year on June 29th to the historic arms burning in three areas of the Caucasus, exile of many Russian Doukhobors, followed by 7,500 dissidents migrating to Canada in 1899. This sobranie at the Doukhobor Home in Saskatoon would not take place today without the brave actions of conscience of our brethren.  We need to thank them for giving us life and spirit.

As Spirit Wrestlers / Doukhobors, we stem from a philosophical-spiritual tradition that comes from many sources including the Judea-Christian, Bogomil, and Tolstoyism traditions. Like the Society of Friends (Quakers), we rely on the Spirit Within for our inspiration. Most Quakers, for example, do not celebrate Easter, but consider this rebirth process as a daily task of human beings.

At this gathering in Saskatoon, you may be surprised to learn that the real meaning of Easter must go back many centuries to paganism when people celebrated the Sun god as the provider of energy for life.  In their conversion efforts, the Judeo-Christians adopted and modified the pagan traditions, while replacing cyclical nature with an invisible, inert god and a personal, linear human idol (Jesus Christ) to worship as its representation.

A modern historian in April 2001 wrote this about pagan wisdom:


‘Pagans were familiar with the cycles of nature that made life everlasting. Life and death were not considered personal ego-based conditions and feared as they are in Judeo-Christianity, but were seen as stages of growth and decay through which everything living inevitably passes. Instead of being afraid and needing to be “saved” from life, pagans loved this world and lived with honor and respect so that they were able to have the best lives possible. The notion of a “better world” reached by dying was not their life’s goal. Instead, they believed in making this world better for each other and for their children. Here “better” does not concern itself with being meek or moralistic, but rather is focused on what is real and heroic in life, while also preserving its rich roots and heritage….’ (datejesus.com/sermons/easter/).

In summary, the message for Easter 2011, as I see it today, is a celebration of the rebirth of life and love in our everyday behaviour.  It is a respect for nature as it is a respect for people.   In real terms, we can say ‘No to war’; ‘Yes, to a culture of peace’.

‘No to violence’; ‘Yes, to the Golden Rule of loving thy neighbour as thou self.’

Духоборы в Грузии — Doukhobors in Georgia — is a 3-minute PIC-TV news segment (off-line) about village Gorelovka (Goreloye) broadcast 18 April, 2011. Vladimir I. Tolstoy, his daughter and others are shown visiting the Orphans' Home (Sirotsky dom) and lunching with staff and Doukhobors at the Lev N. Tolstoy Secondary School.

The return of a few Doukhobors contrasts with previous news that Doukhobors have nearly abandoned their communal farms in Georgia,

More about Doukhobors in Georgia.
Posted by Andrei Conovaloff at 10:47 No comments:

Q41: What Does Spirit Wrestlers Mean?

I am curious, and perhaps you can help me. Why are the Doukhobors called "ghost" or "spirit wrestlers?"  I can find much in the literature about the interesting history of the group, but no explanations of the designation. Can you explain?


'The term Doukhobor is derived from [Russian] Dukho-borets, or Spirit Wrestler. It was first formulated in 1785 by the Russian Orthodox archbishop of Ekaterinoslav in the southern region (present-day Ukraine) of the Russian Empire, who used the term in a derogatory manner, implying that it referred to those who wrestled against the spirit of the church and God. The group itself, however, adopted the name with the understanding that it referred to people who "wrestle with the spirit of truth". Although comprising elements of religion and a distinct way of life, Doukhobors might best be described as a social movement characterized by love, human goodness, and justice....' 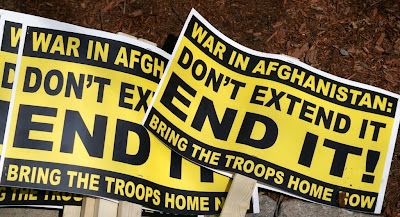 April 9th was a Pan-Canadian day of action against war. It was called by the Canadian Peace Alliance and the Collectif Echec a la guerre. In Ottawa, In Canada's capital, it was organized by the Ottawa Peace Assembly which is a city wide coalition of students, labour, faith, and community groups opposed to Canada's complicity in the so-called 'war on terrorism'.

The video publicizing this event simply asked 'Have you had enough?' 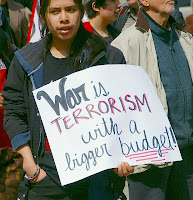 Around 100 people turned out at the Human Rights Monument, where several people spoke out on the theme. The group weaved its way through town to the Market Area, handing out leaflets, singing songs of peace, with musical accompaniment of two drummers. Among the most vociferous speaker was Clayton Thomas-Iler, a native representing the Indigenous Environmental Network. He said:


'War is the ultimate terrorism....We need to stop military intervention and make war in Afghanistan, Iraq and now Libya an election issue.'
For me the most important human right is the right not to kill or be killed. After all the shameful slaughter of human beings over the centuries, the time has long come when we as homo sapiens need to turn a new direction in our lives. How about adopting a killing free world by means open to infinite human creativity, such as proposed by the new Center for Global Nonkilling? For Canada, the setting up of a Canadian Department of Peace, at the cabinet level, would be a good step in this direction.

With the Canadian federal election called for May 2nd, as concerned citizens, we all have a responsbility to ask our political candidates to respond to each of the issues raised by activists on the weekend. These issues are important for the health and survival of our society and the world community.

In a real democracy there is a place for honest discussion and the open sharing of information on programs that affect the quality of our lives.  Every man, woman and children of any age deserves to be treated as a genuine and equal human being.  Certainly we have a right to good health, education, housing, the opportunity to work for a decent-living wage, as well as clean environment. 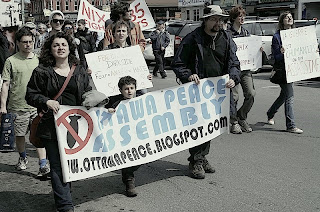 Away with deadly fighter planes. Away with meddling in the affairs of other sovereign countries. Reduce the military industrial complex to a trickle. In 2009, the world spent more than $1.5 trillion on the military, with the United States responsible for over half of all the expenditures. Canada is the 13th highest spender in the world after more than a decade of yearly increases, and many more years of increases are planned. It's time to reduce military spending, and use the public resources to fund human needs. Let's get our own house in order and become an example of a fresh vision for a world without wars.

Let's get our political candidates to think and act on real human needs. If they refuse to do so, vote them out of office. Once elected, they must promise not to be adversaries, but to work cooperatively across the political spectrum to get things done. That is our way in making Parliament work as it should.
Posted by Koozma J. Tarasoff at 14:32 1 comment: