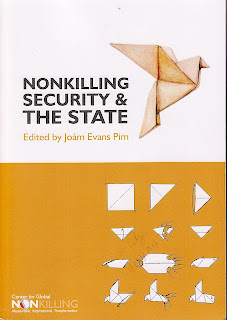 Nonkilling Security and The State (May 2013; 426 pp), edited by Joam Evans Pim, The Center for Global Nonkilling. Download this free e-book.

This is a collection of 19 essays by 22 scholars of anthropology, sociology, political science, philosophy, and history who explain how we need not stand as spectators as in a killing world. From the folly of destruction over the centuries, we must now turn our attention to the means of preventing that destruction. Dr. Younger emphasizes that today: 'There is no more important problem. None' (1).

The collective wisdom of these scholars should be used by governments in building nonkilling institutions such as the cabinet level Department of Peace; building security without deadly violence; developing nonlethal technology in international security; tackling the sensitive issue of nuclear weapons and a nonkilling world; discovering nonmilitarization and countries without armies; diplomacy in the service of nonkilling objectives; Islam and the West; looking at nonkilling approaches to the politics of self-determination; exploring reverence for life and reverence for death; and creating political conscience for future generations.

Below are some of the learning points that I discovered in my reading:
Peace movements can benefit from this book in finding a practical, unique and visionary path in their role as bridge-builders and peace-makers. Instructors at all levels can benefit in finding important teaching points in cooperation, conflict resolution, and the role of love in building a peaceful world. The community and the family can benefit in helping to build a nonkilling society. Nonkilling is a measure of progress of our civilization. To achieve our common goals, we need to exercise our imagination in the spirit of humanity (10).

The Center for Global Nonkilling: An Update

A vision of a nonkilling society was proposed 1998 and, then formalized in 2002 by Dr. Glenn D. Paige, University of Hawaii, in his book, Nonkilling Political Science. Though a Korean war veteran, he simply says that killing is a curable social disease. His plan was promoted in 9 books and 10 articles from 1991 to 2004.
My colleague Balwant "Bill" Bhaneja, Senior Research Fellow, Program for Research in Innovation Management and Economy (PRIME), School of Management, University of Ottawa, and co-founder of CPDI summarized Dr. Paige's 2002 book in a review for Peace Magazine, Jan-Mar 2005, page 27:


The term "nonkilling" is not as comforting as "nonviolence." Mighty nations still assert pre-emptive wars without qualms. Paige shows that both the violence-accepting politics and political science of the last century have failed to suppress violence by violent means. The study of government and international politics has not addressed the root cause of global violence.

Paige's vision is for political science to diagnose the pathology of lethality, and seek to remove killing from global life. He shows that at most only about five percent of human beings have ever killed another person. Paige suggests we should train people to strengthen their resistance to killing.

He uses medical science as a metaphor. Medicine, through focusing on prevention, intervention, and post-traumatic transformation strategies, has produced both knowledge and practitioners for the preservation of life. Paige considers the same commitment to non-lethality applicable to the social sciences.
In November 2007, the First Global Leadership Forum on Nonkilling was held in Hawaii, attended by about 50 wisdom people from the around the world who suggested ways to build a warless world.


I was honored to be invited to present a paper, and attended with my wife Kristina Kristova. We listened to the wisdom of the ages about such stalwarts as Mahatma Gandhi and Martin Luther King Jr. I took photos and presented my talk: Tolstoy and the Doukhobors, about how we contribute to the quest for a killing-free world order. My paper is on pages 207-214 of Global Nonkilling Leadership Forum Book of Proceedings, 2008.

Since 2007, the Center for Global Nonkilling has blossomed to become one of the world's foremost imaginative nongovernmental institutions working to create a just culture of peace and save our Planet Earth from the epidemic of violence and wars.
For Dr. Paige's 80th Birthday, I had the honour of writing a tribute to him, published in 2012 in Towards a Nonkilling World: Festschrift in Honor of Pro. Glenn D. Paige (edited by N. Radhakrishnan, Glenda Paige, Balwant Bhaneja, Chaiwat Satha-Anard, and Joam Evans Pim). My closing paragraph (p. 52) was:


My deep thanks to Teachers of Life such as Lev Tolstoy, Mahatma Gandhi, Martin Luther King Jr. and Dr. Glenn Paige. As wrestlers for Truth, our main challenge today is to grow a good harvest (without killing and exploiting our fellow beings) and not allow it to be trampled down. Let's do our part to ensure that the spirit of wisdom will be distributed far and wide throughout the world. Let's give wings to the good ship of Love called Global Nonkilling!

The Center has excelled by coaxing scholars in all disciplines around the world to produce well-researched books using the nonkilling architecture for human relations. Besides the numerous publications, Dr. Paige's landmark book has been translated into 28 languages, with more in progress. In its 19 Research Committees, over 600 scholars from 300 universities are involved working on relevant research.

All publications are free to download and printed copies can be purchased at cost.

Here are links to articles I posted which directly promote the Centre, among many which promote peace:

I had the honour of being a 'Book' in the Human Library Project in Ottawa, Canada. I was one of 25 'Books' who talked to people one-on-one about our diverse experiences in peace at the Canadian War Museum's: Peace —The Exhibition, on Sunday June 9, 2013. 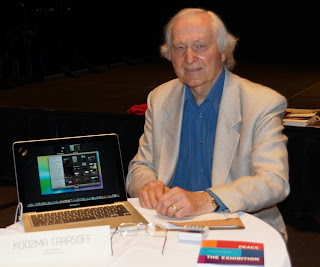 This was the second Human Library project held at the Canadian War Museum.

The Human Library was launched in Denmark in 2000 to focus attention on anti-violence, encourage dialogue and build relations. It has grown in popularity with over 30 countries taking part including Brazil, China, Colombia, Cyprus, Malaysia, South Africa and Australia.

In Canada, 'in January 2012 CBC Radio Ottawa and the Ottawa Public Library held six simultaneous Human Library events at six different branches of the library and there was a special event at the Canadian War Museum. The extensive project inspired other regional radio stations of the CBC to become actively involved in the promotion and implementation of the Human Library in civil society in Canada.

My title was 'Peace Activist'. Other 'Books' were titled:
With 24 other 'Books' in the Danson Theatre, I had 11 visitors / readers at my table, in sets of one or two, for a maximum of 20 minutes each. My readers were from Canada, USA, Mexico and India. Six were women, five were men. The youngest was 12, the oldest was in the 70s. Readers asked questions about my peace activism, my Doukhobor background and the novelty of this Human Library project. Here are some highlights of their views:

A mother and daughter from Quebec suggested a series of candid ideas for beginning a public conversation on war and peace. Here are some of their ideas:
As Peace Activist, my main expectation from the Human Library project was to discover ways of beginning a public conversation on killing and nonkilling with the intent of creating a world without wars. Granted, this is a Big Task. But it is an idea whose time has long come. The Canadian War Museum, with its Peace Exhibition followed by its Human Library Project is a good beginning. See the nice YouTube video clip advertising the event.

In looking around the room of the Theatre, it was very clear that the Human Library Project could accommodate many more people. Several of the 'Books' were laying idle, awaiting the curious reader. Why not bring in a bus load of Grade X students and let them loose to explore the books before them? This could be a mutual learning experience for all and the beginning of new discoveries about creating a better world. It would be a good way to involve young people in the discussion.

The Canadian Broadcasting Corporation ought to be involved in the next Human Library project, as it had done successfully in 2012. Publicity is a vital ingredient in ensuring that the public knows the schedule of an important event.

As we mark the fifth anniversary of the Canadian War Museum in its new location, let us reflect how it defines Canada's role in world affairs. Not only is it about military heritage, preserving artifacts of national significance and a look at the service of our veterans, but it is also about the importance of peace (in reality, the word 'peace' ought to have a legitimate place in the Museum's title).

In the eye of the storm (the Canadian War Museum), so to speak, this is a good place to start in seeing things clearly. Visit the Peace Exhibit before it closes on January 5, 2014. Most important, dream a little and imagine a better world without wars. Make your voice known on the most important question — the survival of our civilization including our own lives. Let's begin the discussion....