I was encouraged to see that at the People's Social Forum in Ottawa this month there was some talk about reviving some grassroots, antiwar counter-balances to what was formerly Cold War foreign policy in Canada, since Canada's foreign policy regarding Russia is beginning to resemble that again. As the official lines of dialogue close ever more between Russia and Canada, it will be that much more important to keep exchanges between our own citizens and our friends in Russia and Ukraine strong and vibrant.

Do let me know of any initiatives or groups that have sprung up for this purpose of maintaining peaceful dialogue between peoples (from the Doukhobor communities or in general) and I will be a happy participant.

(Ms. Marlin is a Political Science PhD candidate and instructor at McMaster University.)

At this moment, I do not know of any international effort for peaceful dialogue between people living in Canada, Ukraine and Russia. There is much discussion within each separate country. I invite readers to respond.

Ms. Marlin is referring to the People's Social Forum Program, University of Ottawa, August 21-24, 2014. There were 2 International theme sessions about Canada's role with Russia and Ukraine. The second session presentations below are online.

A Doukhobor woman from Nelson, BC, attended the Forum, and in her published report mentions that she was at both sessions below. ('The People's Forum: A Choreography of Resistance,' by Hannah Hadikin, Iskra #2082, 1 Sept. 2014, pages 31-32; and posted at Canadian Voice of Women for Peace, where she is a National Board Member.)

Understanding Canada as part of international imperialism, economics of imperialism, deception about Ukraine, Syria and foreign policy generally, Canada’s role in wars from looting resources to suppressing popular change, and the need for an anti-imperialist peace movement. The workshop will discuss strategies to get Canada out of the NATO military alliance and oppose plans to glorify the First World War.

What is Canada Doing in the Ukraine and What Should the Peace Movement Do About It? — by NOWAR-PAIX. David Mandel, Roger Annis — Program page 30.


The panel will present an analysis of the situation in the Ukraine, Canada’s role in it, and the serious nature of the situation. The issue to be discussed is: What can the peace and antiwar movement do to counter the Government of Canada’s aggressive posture toward Russia, and oppose its contributions to a NATO military mobilization in Eastern Europe?
More about the forum.

More: Questions and Answers, Comments
Posted by Koozma J. Tarasoff at 10:22 No comments:

West vs. Russia OR Russia vs. West ?

There's a lot of varied news and opinions in all media about Russia and Ukraine, and I too have much to say myself.

Instead of me blogging, here are honest unedited opposing viewpoints from recent correspondence from Canada and Russia. These professionals do not know each other, but summarize the problem.

I added the bold.

This is a strategic economic opportunity for Canada. Europe needs an alternative source of petroleum products and natural gas. Rotterdam is set up to receive LNG [liquid natural gas] from offshore into the European pipeline network. Keystone XL will feed refineries that have been upgraded at great cost to produce low sulfur diesel that meets European standards. Russia will be more reasonable to deal with. These issues are being discussed by Harper and Merkel. Let’s be grateful that the PM is so capable.

I strongly empathize with the Russians in south-eastern Ukraine. In Odessa, my classmate Elena R’s only son has died. No doubt, you know, that the right-wing extremists, simply stated — as fascists — burnt people alive in the Union Building [in Odessa]. They were herded there, set afire, and those who managed to jump out the window, were clubbed to death on the ground. Elena’s son, who was 27 years old, jumped out the window, but the fascists, clubbed him to death. Currently people are being slaughtered in south-eastern Ukraine, and the world’s institutions in the name of democracy proclaim sanctions against Russia. For me, the word ‘democracy’ has become a swear word. If this is the sort of democracy that you have, then I want nothing to do with it!...
Posted by Koozma J. Tarasoff at 14:04 2 comments:

In the Thursday August 14, 2014 issue of the Kamsack Times on page 13, there is an article : ‘Discovery of unusual hooded garment at Pelly museum leads to research of Ku Klux Klan activities in Saskatchewan.’

To my knowledge this garment was worn by Doukhobors to keep warm, and had nothing to do with the type of hood garment worn by the KKK.

As we at the National Doukhobor Heritage Village in Verigin, Saskatchewan, believe the article was written with a reference in error to the real truth. We want to set the record straight. We are asking for your reaction to the article. Any insight would be helpful.
Answer

You are correct Keith. The newspaper shows a Russian hood, called bashlyk (башлык), made by our Doukhobor ancestors. These were common in Imperial Russia.

Maureen Stefaniuk, the museum’s summer attendant, should retract any connection between their display and Ku Klux Klan in Saskatchewan. Canadians have been falsely selling Freedomites as Doukhobors for more than a century, now they are falsely displaying a Doukhobor garment as KKK.

Here are comparisons of 3 Russian-made bashliki with one of current fashion. 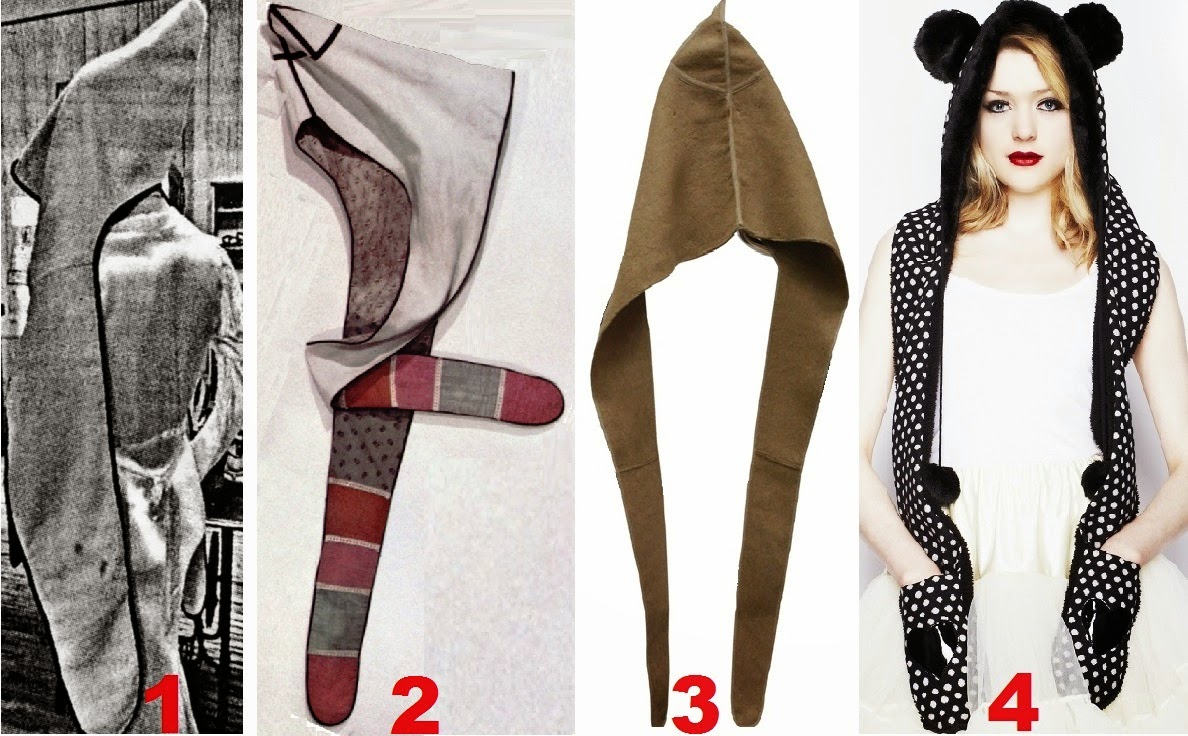 Doukhobor bashlyki are on display at the Doukhobor Discovery Centre in Castlegar, British Columbia; and at the National Doukhobor Heritage Village in Verigin, Saskatchewan. The Fort Pelly-Livingstone Museum can confirm their garment with these 2 museums.

Russian websites show many examples and instructions for making them. Modern English names and styles for this scarf-hat-hood garment vary. Many have animal heads and ears. Sometimes they are mislabeled “snood” — a hair net, which is not a contraction of “scarf-hood.”

Among non-Doukhobor Spiritual Christians from Russia in the USA (Dukh-i-zhizniki, Molokane), their women's' head covering for religious meetings which they call kosinka (triangle), evolved from a scarf of solid fabric to lace cut in a snood-style pattern.