News from the Doukhobor Society of Saskatoon (DSS) about:


2014 December 21, Sunday, 11 am — Annual Christmas Prayer Service
Koozma, Your greeting to the Saskatoon Doukhobor Prayer Service was well received. The message of LOVE is a universal application. I add the prayer line ... "where there is love, there is God." I am the only one that says a prayer in Russian, but God hears all of us.

The dom was full. Many folks attended. Many of the folks we don't usually see at the dom. A 6-year-old sang a solo. There were 4 young kids who sang Jingle Bells. The Russian cultural singers did not come as the flu took over.

Each of the elders brought greetings. June Bold and Peter Perverseff are now elders. too. Verna Tarasoff Thompson brought Polly Meakin from Langham. The singing was superior. Peter P. gave the message and Jeanette Stringer conducted the service.

There was an amazing amount of food. The place was loud with all the conversations. We donated a dinner gift to the Salvation Army and gifts to the 7 kids in that family. The pile of presents was huge.

As always, at the end of the potluck dinner, Verna asks me to start 2 folk songs and we really "rock." A hand of friendship was prevalent all the time, all day. 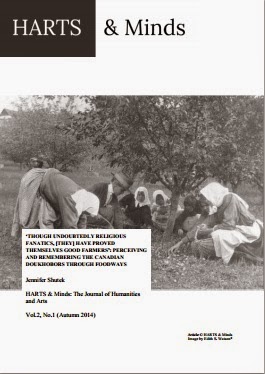 This summer I was asked to peer review an article by a recent graduate of Simon Fraser University, B.C., Canada, who is now a graduate student at Oxford University, U.K., to be published in a British university journal. I did not know the student or the journal.

Shutek, Jennifer. ‘Though Undoubtedly Religious Fanatics, [they] have proved themselves good farmers' : Perceiving and Remembering the Canadian Doukhobors Through Foodways, HARTS & Minds: The Journal of Humanities and Arts, v.2, n.1, August 2014.

I emailed 9 corrections to the editors about misspellings, omissions, misunderstandings and incomplete explanations.

When I shared my note with webmaster Andrei Conovaloff, he found the article already posted on the HARTS & Minds website, and saw more errors. Only a few of my 9 corrections were used. Together we decided it would be best to post our own edited version of this article for people who now rely nearly entirely on the Internet for information. Many minor changes were needed.

Our revised article, Canadian Doukhobor Foodways, has a much shorter simple title, links to the original, edits and comments in red nest to original text, and links to nearly all the online references and technical words used. It presents a lesson in how easy it is to misinterpret literature while doing research. When possible a researcher should interview subjects.

The article is not bad for a college history senior. The mission of the journal HARTS & Mind is 'to give more postgraduate students a chance to have their work published, for their resume. Shutek did a good job listing 51 footnotes and 48 sources, giving a premise — 'delimiting communal boundaries, and in defining the Self and the Other' —, and describing how descendants of immigrants maintain their heritage through food. It appears that for convenience she selected her printed sources from one library and the rest from the Internet, which limited the scope of her paper.

We feel too much space was used trying to summarize a complicated, delicate history, which reduced space for the intent of the title — foodways. Of about 10 pages of text (2-11), 7 pages were mostly history which left 3 pages for discussing foodways and a conclusion.

Perhaps a better goal would be to compare foodways among several immigrant groups from Eastern Europe in Canada. But Ukrainians, Mennonites, Hutterites, Slavs, Bulgarians, Russians, etc., like Doukhobors, are not homogeneous groups. We all have many divisions, faiths, varied traditions, and people dispersed along a broad spectrum of isolation-integration-assimilation over time, which is difficult for an outsider to perceive.

A narrow approach would focus on one or a few food types. When searching for translations for sukhari (dried-bread), a variety of similar dried breads were found in many cultures. The same for pirogi and borshch. How these are spelled in English, preserved and altered, compared and contrasted, as heritage markers across immigrant groups and culture classes over time and generations, would be interesting research.
Update: Since this was posted, I have received correspondence from both the author and editor, to which I replied on December 12, 2014, and attached at the bottom of Canadian Doukhobor Foodways.
Posted by Koozma J. Tarasoff at 18:12 4 comments: