The opening image is a 1893 sketch of the Doukhobor village Gorelovka, Tiflis province, Russia, by H.F.B. Lynch. Russian Television (RT) sent a Georgian video crew to produce this documentary. The opening sound track is sprinkled with singing and snippet previews of this 'sacred place.'


Presented mostly in English over Russian dialogue, the introductory printed text along with another text further on explains the context of this film:

This is one of the better films on the Russian Doukhobors for several reasons. It is tightly edited. Their philosophy is clearly articulated. The tone is upbeat, friendly and informative. Unlike previous videos in Georgia which focused on women, here men and children are included. The video quality and color are beautifully done.

The story is quickly paced from the time the crew leaves Tbilisi by car, arrives in Doukhoboria, climbs on top of a heritage earth house with a green grass roof, where they view the world of the few remaining Doukhobors in a village now occupied with Armenians and Adjarians (Muslim Georgians). The journalists ask many questions in voice over, which are eventually answered by the subjects in interviews. They translate most of the Russian in subtitles, and give insightful commentary throughout.

The journalists describe their roof top view as if it was 'from another planet.' The old Doukhobor village has given way to 'a Caucasian ghetto.' There is nostalgia for the old Soviet era when living together was a pleasure, cleanliness was a virtue, education was free, orderliness, culture and a job gave rhythm to life. There was a view of a public school with only several children present; they were reciting Russian, Georgian, and Armenian alphabets.

After 170 years in the region (having moved in exile from the Milky Waters area of the Crimea in the mid-1800s), only about 150 Doukhobors remain in Gorelovka here today. The trend is towards out-migration and a loss of identity. Their stone architecture remains a prized possession of neighbours who see an opportunity to get good cheap or free accommodation as locals move out to Russia. Only 57 Doukhobor houses remain in this village. 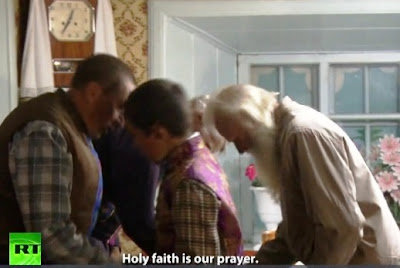 Easter service begins at midnight with men on the left (3 men and a boy) and 12 women in beautiful traditional costumes on the right, perform a prayer service where there appears to be no leader yet there is a feeling of unity.

In 'Neighbours' a young fellow admits he came because his Armenian grandfather moved here. The village administrator regrets that so many Russians have moved away.

The remaining Doukhobors survive off their land — selling milk, cheese, and growing gardens. We see one of the women in the home making traditional pirogies.

The short clip of the storks in a nest on top of a pole is beautifully-done. According to legend, say the locals, these birds are a symbol of new birth, kindness and love. 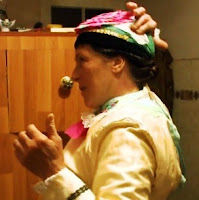 In 'Faith' a woman describes the symbology of her Doukhobor cap. She says some suggest that Doukhobors 'originated in Byzantia,' a predominantly Greek-speaking continuation of the Roman Empire.

The last segment, 'Sacred Place,' is a tribute to the past at the Burial site of the leaders, a 3 kilometer drive west east of their village, where they join Doukhobors from neighboring Orlovka village.

The philosophy of the Doukhbors is clearly articulated with the words 'behaviour is the measure of ones life.' Vasily points out that Doukhobors don't believe in baptism. They see no need for churches which they consider to be 'idolatry.' Their God of love is within. 'Giving to the poor' and helping your neighbour is sufficient. White-bearded Nikolai states that Doukhobors 'live by their word' so that their actions speak louder than words.

Although this could be a depressive story of a people losing their property and their identity, the presentation remains upbeat, portraying the inevitable change that has occurred because of recent geo-political and economic circumstances. In the end, morality wins.

I was surprised that the caves and the 1895 Arms Burning site were missed. Despite these major omissions, this video story is well worth viewing because it really gives the viewer an impression of what life is like there in 100s of scenes and thoughtful dialog.