'Guns to butter' for a Better Future

There are many ideas towards a plan for world peace and development. See 'More' below.
I summarized two proposals posted in March 2021 which I believe are fresh, feasible and authentic regarding converting 'guns to butter' for a better future.
1.  Close all USA military bases 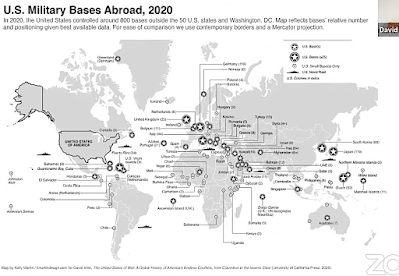 The Quincy Institute for Responsible Statecraft (QI), has been brave enough to tell the world that some 800 US military bases around the world appear to have little or no usefulness in keeping the country safe and prosperous.
In a one-hour webinar 'Taps for America's Empire of Bases?', QI president Andrew Bacevich moderated David Vine, Christine Ahn, and John Glaser.
These 3 experts agreed:
The Quincy Institute is a new US 'think tank' founded in December 2019. It is 'the most truthful and daring of the dozens of these entities that exist in the Washington DC area', according to Sharon Tennison, Founder and Director of Center for Citizen Initiatives, in a March 11th letter to its members.
2.  Putin's 'open system'
Matthew Ehret, Senior Fellow at the American University in Moscow and editor-in-chief of the Canadian Patriot Review explains global 'win-win cooperation' for the future in 'Putin's Vision for an Anti-Fascist/ Open System Future and You' (The Canadian Patriot, March 10, 2021).

Ehret reports that President Putin speaks about an 'open system' of international behaviour that would avoid wars and instead would focus on cooperative efforts of multi world nations for joint security and development, such as the following:
Ehret concludes: 'If Russia, America, China and other nations of the UN Security Council and BRICS were to apply their best minds to solving these problems rather than fall into a new arms race, then not only would either country benefit immensely, but so too would humanity more broadly.' Agreed! Let's hope it becomes a reality.

This means that we all need to look inward and have the moral courage to make this happen. Peace starts with us. Yes, 'Guns to butter' for a better future!
More

O’Connor, Taylor. 10 Global Peacebuilding Networks. In Transcend Media Service, March 15, 2021. [We can add to this list many others, such as: Center for Global Nonkilling, World Beyond War, Project Ploughshares, Center for Citizen Initiatives, Coalition to Oppose Arms Trade, Voice of Women for Peace, and PeaceQuest. For alternative news sources see Honest World News.]

United Nations. Dept. of Economic and Social Affairs. Transforming our world: the 2030 Agenda for Sustainable Development. Adopted September 25, 2015. Preamble: This Agenda is a plan of action for people, planet and prosperity. It also seeks to strengthen universal peace in larger freedom….The 17 Sustainable Development Goals and 169 targets which we are announcing today demonstrate the scale and ambition of this new universal Agenda….'

World Beyond War.org. A global movement to end all wars.