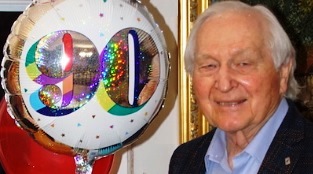 My wife and our daughters arranged the event which featured prerecorded video messages, phone calls, and some sent an email or letter. Thank you all.

In early February my daughter Tamara and her husband John, and Kristina with her daughter Milena, decided to arrange a virtual party. They invited many people to submit short video messages at a website, or any way the guests would like. About 60 people participated resulting in a 1.5 hour video and more than a dozen emails, cards and letters.

Kristina wanted to create a photo album of my life, and we selected about 50 photos which became a slide show presentation of my '90 Years of Memories'.

During the planning process, I began to reflect on my 90 years and listed these highlights of my life so far, a short version of my biography and 50 Years of Doukhobor Studies.